With the release of Carrie Smith’s Unholy City, readers will once again embrace Claire Codella and her brand of New York City. This police procedural series continues to impress with each new addition to the franchise..

Unholy City finds Claire working closely with another detective, Brian Haggerty. Fans of the series know that Claire and Brian have quite the complicated relationship – and while they are currently lovers, working together still has its share of challenges. Eduardo Muñoz, who was recently outed as a gay detective on the NYPD force, once again also plays a significant role in this latest investigation. 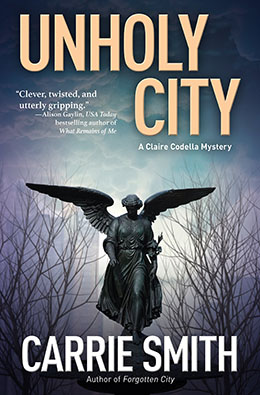 The case at the core of the novel involves a series of deaths at St. Paul’s Episcopal Church. Carrie Smith has structured the novel such that it emulates a locked room mystery – meaning there is only a limited pool of suspects. This heightens the tension over the four-day time-span covered by the novel. Claire Codella, and readers, quickly discover that fewer suspects does not necessarily equate to fewer secrets.

Carrie Smith knows the logistics of investigations and how they move forward step by step. She is very good at documenting that process for readers without it seeming like mundane work. This is not a novel where twists come out of nowhere to surprise readers, but rather one in which long-festering opinions are exposed organically from discussions with suspects. This is not to say that there are not a few unexpected revelations – just that the goal here in not to shock readers with clever manipulations.

As with the previous novels in this series, Carrie Smith populates her cast with as much diversity as possible. She knows how to include typically disenfranchised communities without it seem like she is latching on to latest cause célèbre. Along with that, Carrie manages to weave in racial, ethnic, and religious themes without getting heavy-handed.

Fans of the series are sure to be invested in the new developments in the personal lives of these characters. With each new book, they become more and more like family – both amongst themselves and with the reader. As with any family, there is love, support, and a fair share of dysfunction. By the end of Unholy City, some major changes are taking place and it will be interesting to see where Carrie Smith takes them in the next novel.