I delayed this week’s BOLO report by a day because yesterday was a celebration of Martin Luther King, Jr.s birthday and life. With that in mind, I would like to share one of my favorite quotes from this great man: “We are not makers of history. We are made by history.”

And now, for the new books that are available on shelves everywhere today! 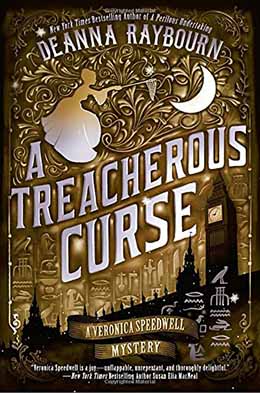 If you have not yet made the acquaintance of Veronica Speedwell and Stoker, you really should remedy that immediately. While a historical series, the character of Veronica will speak to the modern women as she continues to defy the artificial restraints placed upon her because of her gender. And who can resist the dark and mysterious Stoker? Certainly enjoyable if one starts with this book, but I suggest going back to the beginning – these two have quite the relationship!

Members of an Egyptian expedition fall victim to an ancient mummy’s curse in this thrilling Veronica Speedwell novel from the New York Times bestselling author of the Lady Julia Grey mysteries.

London, 1888. As colorful and unfettered as the butterflies she collects, Victorian adventuress Veronica Speedwell can’t resist the allure of an exotic mystery—particularly one involving her enigmatic colleague, Stoker. His former expedition partner has vanished from an archaeological dig with a priceless diadem unearthed from the newly discovered tomb of an Egyptian princess. This disappearance is just the latest in a string of unfortunate events that have plagued the controversial expedition, and rumors abound that the curse of the vengeful princess has been unleashed as the shadowy figure of Anubis himself stalks the streets of London.

But the perils of an ancient curse are not the only challenges Veronica must face as sordid details and malevolent enemies emerge from Stoker’s past. Caught in a tangle of conspiracies and threats—and thrust into the public eye by an enterprising new foe—Veronica must separate facts from fantasy to unravel a web of duplicity that threatens to cost Stoker everything…

Fans have been waiting for the return of Frost Easton. This time out, it looks like the case is going to get personal. Once again, the Detective Frost will be helped along by the woman at his side – this time, she’s an author who happens to know details about the serial killer, information that makes her a prime target.

One cop’s lie has set a killer free.

Four years after serial killer Rudy Cutter was sent away for life, San Francisco homicide inspector Frost Easton uncovers a terrible lie: his closest friend planted false evidence to put Cutter behind bars. When he’s forced to reveal the truth, his sister’s killer is back on the streets.

Desperate to take Cutter down again, the detective finds a new ally in Eden Shay. She wrote a book about Cutter and knows more about him than anyone. And she’s terrified. Because for four years, Cutter has been nursing revenge day after stolen day.

Staying ahead of the game of a killer who’s determined to strike again is not going to be easy. Not when Frost is battling his own demons. Not when the game is becoming so personal. And not when the killer’s next move is unlike anything Frost expected. 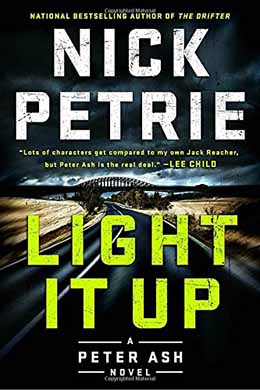 Nick Petrie has certainly accumulated massive critical acclaim and award wins since launching the Peter Ash series. Thriller fans have a new hero to root for. With this latest book, Petrie (and Ash) tackle the timely subject of legalized marijuana and the business behind it. Needless to say, things don’t go so well.

In this action-packed thriller starring war veteran Peter Ash, a well-planned and flawlessly executed hijacking reveals the hidden dangers of Colorado’s mellowest business, but Ash may find there’s more to this crime than meets the eye.

When Peter is riding shotgun on another cash run, the cargo he’s guarding comes under attack and he narrowly escapes with his life. As the assaults escalate, Peter has to wonder: for criminals this sophisticated, is it really just about the cash?

After finding himself on the defensive for too long, Peter marshals his resources and begins to dig for the truth in a scheme that is bigger—and far more lucrative—than he’d ever anticipated. With so much on the line, his enemy will not give up quietly…and now he has Peter directly in his sights.