The Wife – The BOLO Books Review

“Misunderstandings don’t happen when a situation is black and white. They only happen when there are shades of gray, when there could be two different versions of the same damn thing.” (Burke, The Wife)

Few art forms examine society’s ills as incisively as does crime fiction; but even with that knowledge it can often take years before a novel comes along that tackles our more explosive contemporary topics. Not so, with the recent rash of sexual harassment claims. Even as this epidemic is still unfolding and new allegations are being made daily, Alafair Burke releases The Wife – a novel that dares to examine this flood of immorality from all angles (and from some sides we couldn’t even imagine existed.)

Told from the point of view of Angela Powell, The Wife chronicles the downward spiral of Jason Powell’s life as allegations of sexual harassment – and worse – are hurled at him from several different women. The similarities to recent real life cases are uncanny and yet Alafair Burke takes readers on a journey they will never anticipate. 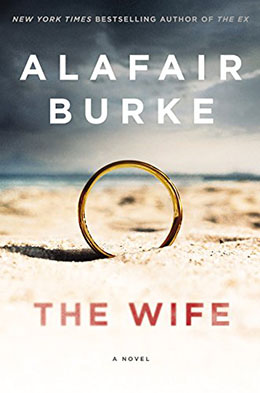 As readers witness Angela grappling with the realization that she may not fully know the man to whom she is married, they also learn that Angela herself has some secrets in her past that she will do just about anything to keep hidden. Many novelists would have built the book around Angela’s past, but here it serves to further complicate a difficult situation in such a way that it will have readers sympathizing with Angela on multiple levels. As she stands virtually helpless on the sidelines, she shows an inner strength that is admirable, cultivated over time and unabashedly loyal.

The Wife is a stand-alone novel that is vintage Alafair Burke. The combination of character and plot is gripping, but Burke’s understanding of the legal system elevates this novel to another level. The pacing is about as near perfect as one can expect from a book – each hill and valley is perfectly placed, the chapters end while retaining their grip on the reader so that it is virtually impossible not to read just one more page. More than a few readers will complete this book in one sitting – and will still be sad that is has to end.

While each twist and turn in the plot is designed to alter reader’s perception of the events, these significant complications remain realistic and the ultimate resolutions employed feel authentic coming from the characters as they have been presented to the reading audience across the course of the novel.

Olivia Randall, the heroine of Alafair Burke’s previous novel, The Ex, again makes an appearance in The Wife. A secondary role, for sure, but loyal fans will delight in becoming better acquainted with this complex woman. Seeing Olivia return only confirms that this is a character who could easily carry a series – or even a collection of stand-alones in which she remains a recurring character.

In a year in which readers are anticipating new crime fiction from many of the genre’s greatest practitioners, Alafair Burke has already thrown down the gauntlet with The Wife. This is the first truly great novel of 2018; a veritable instant classic.

Pre-Order Links: The Wife by Alafair Burke (Trust Me! You want to pre-order this book so that you can read it ASAP)

Look for an interview with Alafair here on the blog closer to the official release date – January 23, 2018

Disclaimer: A print galley of this title was distributed by the publisher after the opening ceremonies of Bouchercon. No review was promised and the above is an unbiased review of the novel.