The Hate U Give – The BOLO Books Review

The Hate U Give is Angie Thomas’ Edgar Award-nominated debut and it also happens to be one of the most important young adult novels of all time. Of course, this praise could be hyperbolic, but the significance of works that make tangible the social problems of the day should not be disregarded too quickly as only with time can their placement in the canon be examined.

At this point, everyone has seen the news reports of police-involved shootings perpetrated against young men of color in our country. Yet despite those true accounts – or maybe even because they are true accounts – the message is not getting through. But then along comes Angie Thomas to tell a fictionalize version similar to those real events and just maybe now the beseeching cry for help can be heard. It is a strange phenomenon that people are more comfortable critically examining fictional situations – but since this is the case, it is incumbent for artists to turn their lens on the major social ills facing society. 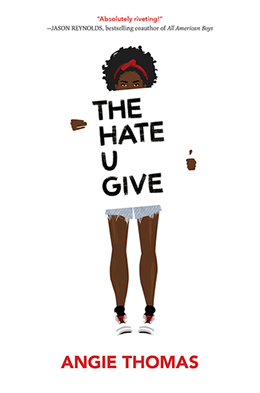 The Hate U Give is the story of Starr Carter, a sixteen-year-old African-American girl from Garden Heights. One night after a party, she and her childhood friend, Kahlil, are pulled over by a police officer. When actions take a violent turn, Kahlil is killed and Starr finds herself unwittingly – and in some ways, unwillingly – thrust into the spotlight.

To discuss The Hate U Give as a story about this senseless shooting would underplay its overall significance. All aspects of Starr’s life are examined and the result for the reader is that Starr becomes a friend and confidant to every reader – allowing us to understand and empathize with her life’s journey. This brings the tragic events of the novel closer and facilitates a more constructive discussion of the various issues at hand.

Angie Thomas is not interested in preaching to the reader. With The Hate U Give, she presents one particular girl’s story. Angie Thomas – as with Starr, herself – is not focused on finding fault and placing blame, but is rather more interested in searching out solutions and garnering compassion and understanding. While the novel is presented from Starr’s point of view, Angie Thomas succeeds in giving voice to all the participants.

It is of particular note that Angie Thomas never takes the easy path within the story. Even though Starr lives in a predominantly black area of town, she attends a primarily white school in a more affluent district. Starr has a white boyfriend, something she receives resentment for from multiple angles. Starr’s Uncle Carlos is a police officer, which further complicates her views on the profession. April Ofrah, the social activist and lawyer for Just Us for Justice, appears altruistic but may her own agenda.

All of these elements combine to form a novel that examines complex issues on a relatable level. The Hate U Give is an easy read, but will have fans thinking over its themes for a long time to come. Many of us are likely to find ourselves thinking: “What would Starr do?” when faced with challenging choices. As with life, there are no easy answers; but just maybe there can finally be true understanding. The Hate U Give only marks the beginning for Angie Thomas, but I have a feeling society will look back on this as a watershed moment in the power of art to affect change.

BUY LINKS: The Hate U Give by Angie Thomas