Sorry for the late posting of the Books to Look Out for list this week – this crazy East Coast weather triggered a migraine and I was in no shape to log on.  But things are better today, and the good news is that these books are available TODAY. 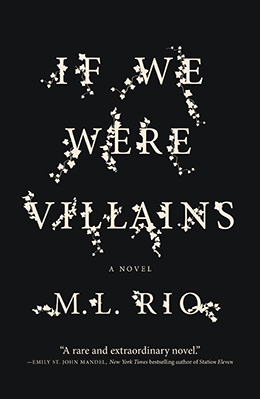 Reminiscent of Donna Tartt’s The Secret History, this blend of theater and mystery is as additive as it sounds.

On the day Oliver Marks is released from jail, the man who put him there is waiting at the door. Detective Colborne wants to know the truth, and after ten years, Oliver is finally ready to tell it.

A decade ago: Oliver is one of seven young Shakespearean actors at Dellecher Classical Conservatory, a place of keen ambition and fierce competition. In this secluded world of firelight and leather-bound books, Oliver and his friends play the same roles onstage and off: hero, villain, tyrant, temptress, ingénue, extras.

But in their fourth and final year, good-natured rivalries turn ugly, and on opening night real violence invades the students’ world of make-believe. In the morning, the fourth-years find themselves facing their very own tragedy, and their greatest acting challenge yet: convincing the police, each other, and themselves that they are innocent. 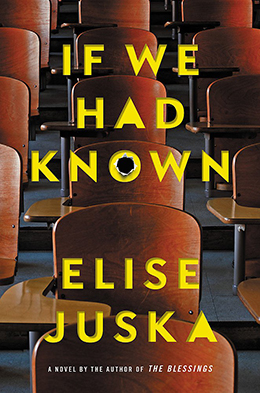 Another timely tale of mass shootings, this one from the perspective of those left behind, those that might have been able to do something to change the outcome, and those caught in the middle.

One August afternoon, as single mother Maggie Daley prepares to send her only child off to college, their world is shattered by news of a mass shooting at the local mall in rural Maine. As reports and updates about the tragedy begin to roll in, Maggie, an English professor, is further stunned to learn that the gunman had been a student of hers. Nathan Dugan was an awkward, complicated young man whose quiet presence in her classroom had faded from her memory-but not, it seems, the memories of his classmates.

When a viral blog post hints at the existence of a dark, violence-tinged essay Nathan had written during Maggie’s freshman comp seminar, Maggie soon finds herself at the center of a heated national controversy. Could the overlooked essay have offered critical red flags that might have warned of, or even prevented, the murders to come? As the media storm grows around her, Maggie makes a series of desperate choices that threaten to destroy not just the personal and professional lives she’s worked so hard to build, but-more important-the happiness and safety of her sensitive daughter, Anna.

Engrossing and provocative, combining sharp plot twists with Juska’s award-winning, trademark literary sophistication, IF WE HAD KNOWN is at once an unforgettable mother-daughter journey, an exquisite portrait of a community in turmoil, and a harrowing examination of ethical and moral responsibility in a dangerously interconnected digital world. 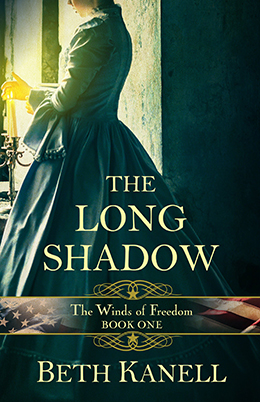 I first heard about this YA novel on the Jungle Red Writers blog. I haven’t had a chance to read it yet, but the blending of fact and fiction in an effort to educate our youth on the past certainly seems like something worth checking out.  The first in a series.

When Alice Sanborn and best friend Jerushah cross paths with a bounty hunter in rural northern Vermont, the teens stage a daring rescue for former slave Sarah Johnson — but winter weather, politics, and challenges of mountain life bring more danger. It’s March 1850 in small-town Vermont, and tempers flare over the “right kind” of Abolition. When the two fifteen-year-olds suspect Alice’s older brother William is taking dangerous risks to shelter a fugitive hiding at the inn, they see Sarah’s safety at risk. With help from the skillful but mysterious Solomon McBride, the girls head toward the wilder countryside along the Canadian border. Perils abound, including back at home. Is it all Alice’s fault? What should she do? Even a teen can take strong action – but which way is right, and how can she choose?