The new Netflix mystery series Safe is the viewing equivalent of those blockbuster summer beach-reads from days of yore: Light on any real substance, but certainly enjoyable while being consumed.

Viewers who know Harlan Coben created it will expect nothing less. Just as Coben does with his bestsellers, he throws everyday people into extraordinary circumstances and just lets the fireworks happen.

The centerpiece of Safe is Michael C. Hall – of Dexter and Six Feet Under fame – donning a serviceable British accent for his suburban dad role. The setting is a gated community somewhere in the United Kingdom. 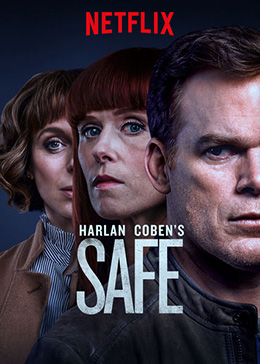 You see, Safe is set in the UK; a fact that probably has more to do with where the funding for the show came from and less about the requirements of the storyline itself. It does, however, mean that the supporting cast is full of some excellent British performers.

The storyline is simple. Dr. Tom Delaney and his two daughters are still reeling from the loss of their wife and mother to cancer one year ago. When his oldest daughter Jenny asks to go to a party, he allows it but tells her not to be late. Unfortunately, Jenny does not return home that night. And thus, the mystery begins.

The police become involved, lead by Detective Sergeant Sophie Mason – played by Amanda Abbington – who also happens to be friends with Tom and his late wife. The precinct has a new member, Detective Constable Emma Castle, whose reason for being in town may not be as innocent as she implies. Tom and his best friend and colleague, Pete Mayfield, have no qualms about beginning their own amateur investigation.

At the same time this is going on, a scandal is brewing at the local high school. One of the teachers is accused of inappropriate behavior with one of her students. It’s unclear if this is true or if Zoe Chahal has been framed. But things get more complicated when it is revealed that Zoe’s son, Chris, was with Jenny the night she disappeared.

Viewers are also privy to the activity at the location where the party took place. The clean-up at the Marshall’s house takes a bit more effort than just throwing away beer bottles and napkins, but these almost comedic scenes are best experienced within context.

Over the course of eight episodes – seven days – the investigation of what happened to Jenny Delaney takes many unexpected detours, with no shortage of suspects. Tom’s personal investigation into the case contains some far-fetched and coincidental moments, but those are easy to overlook under the guise of “check reality at the door before entering.” The solution to the mystery is well-constructed, as is the convoluted history between all these characters.

Safe is a thoroughly enjoyable, binge-worthy television show. It’s not breaking any new ground, but sometimes you just want to get lost in a good story for a few hours!