Truly unclassifiable novels are rare these days – most everything is a mash-up of various tropes from familiar styles – but occasionally something so unique comes along, breaking new ground while seemingly utterly familiar or at least somehow anticipated at the same time. Providence by Caroline Kepnes is exactly that type of novel.

As obsessive fans like myself anxiously await the television arrival of the creepy, yet lovable, protagonist, Joe Goldberg from her debut novel, You – brought to life for Lifetime Television by the likes of Penn Badgley, no less – Caroline Kepnes bestows upon us something completely different. By necessity, this means that some readers are going to be put off by the fact that Providence in no way resembles You or Hidden Bodies. But this is still very much a Caroline Kepnes novel, so for those willing to take the risk, prepare for a journey unlike any other. 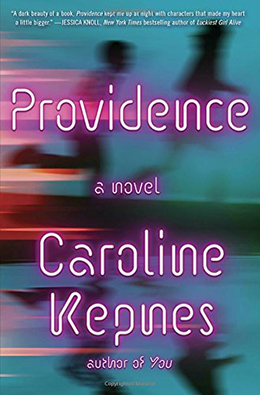 As children, Jon and Chloe had a bond so strong that even the adults around them couldn’t understand it. Into middle school, they are connected on a level that is rare at any age and they can talk to each other about just about anything. But then one day, Jon is kidnapped and Chloe is left floundering with no firm shore in sight. Unable to let go, even after the adults have given up hope, Chloe clings to her memory of Jon until her budding relationship with the local bad boy grows in intensity.

Four years later, just as high school graduation approaches for Chloe, Jon returns. But his experiences in captivity have change him in ways that neither Jon nor Chloe can comprehend. When a subtle connection at a celebratory party results in the death of Chloe’s classmate, Jon flees, afraid that his strange new power is a danger to everyone around him.

Six years later, in Providence, Rhode Island, Detective Charles “Eggs” DeBenedictus is noticing the unusual deaths of seemingly healthy citizens. Within his own family, Eggs is suffering from problems of “connection,” and is looking for some outside, higher, purpose. With that in mind, Eggs starts to investigate these strange incidents. Eventually the worlds of Jon, Chloe, and Eggs begin to circle around each other – and the results are something none of them can predict.

Woven through Providence is the lore of H. P. Lovecraft. When Jon returns from his kidnapping, he has in his possession one of Lovecraft’s novels – personally inscribed by his kidnapper. Readers need not be familiar with the works of Lovecraft to enjoy Providence, but knowing this connection exists will go a long way toward accepting the supernatural elements that exist in Kepnes’ novel.

Ultimately, Providence is a novel about connection. At a time when society is struggling with common decency, debate, and direction, this gem of a novel exposes the links humanity contains within – connections we can never fully comprehend. Life is a journey we are all taking together, and I for one am happy to allow Caroline Kepnes to lead our way for just a bit.