The Girl From Blind River – The BOLO Books Review

Occasionally, debuts come along that are so tightly-plotted and strongly-written that it is hard to believe they are first novels. When that happens, readers instantly know they will be following said author’s career for quite some time to come. That is exactly what will happen when readers pick up Gale Massey’s The Girl From Blind River; there is no turning back.

In a way that is not always the case, the title of Gale Massey’s debut clues her new fans in to what is most important; the girl – Jamie Elders and the location – Blind River. Based on the strength of those two elements alone, The Girl From Blind River would be a smashing success, but in an embarrassment of riches, Gale Massey manages to provide so much more.

Crime fiction needs a character like nineteen-year-old Jamie Elders. She’s spirited, candid, and steadfast to the core; she’s incredibly savvy, yet inherently world-weary; she’s an every-woman who manages to also be one-of-a-kind. This complex nature makes Jamie Elders the perfect type of character on which to base a series. Not only will readers not know where she is going to go in The Girl From Blind River, there is also no telling where Jamie is willing to go in the future. 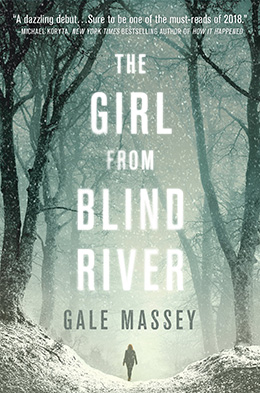 Which brings us to Blind River. Gale Massey’s elegiac language brings this location to life in a way that makes it unforgettable. On the surface, Blind River is nothing special: a struggling corner of New York state one either passes through with arms tense and breath held or a birthplace one aims to rid oneself of as soon as possible. But it is more than a physical place; it’s an attitude that resides in the bones of its citizens, making escape impossible – and just maybe unwarranted.

Of course Jamie dreams of leaving Blind River behind, but she won’t abandon her younger brother, Toby. When Uncle Loyal gets Toby embroiled in a major crime – as the lead suspect, no less – Jamie’s fierce nature roars to the forefront. Self-preservation becomes a non-entity as she willingly sets out to do whatever she must to save young Toby.

Jamie’s journey toward a new understanding of maturity dominates The Girl From Blind River, but the secondary characters are never neglected. The good, the bad, and every permutation between are fleshed out in nuanced ways, eliciting true emotion from the reader with each new plot turn.

Poker plays a significant role in the plot, but excessive familiarity with the game is not really necessary. Massey creates an ambience out of the many risks gambling generates for her characters – a gateway to worse crimes. Based on the authenticity displayed throughout The Girl From Blind River, one suspects that this author’s knowledge of card games is on point.

Gale Massey’s writing style in The Girl From Blind River is unique. While the plot moves at fast clip, the language is methodical and at times lyrically beautiful. This is a writer in charge of every word and phrase, able to seduce readers, keeping them under her spell for the duration. Based on the strength of the writing, the complexity of the characters, and the uniqueness of the setting, a lot of new fans will be created once The Girl From Blind River is completed.

Buy Links: The Girl From Blind River by Gale Massey