Kimberly G. Giarratano’s School Lies is an academic-set mystery with LGBTQ+ themes. Like many books set in the hallowed halls of institutions of higher learning, School Lies pivots on the interactions of the student body, often out of the sight of “responsible adults.”

At the center of School Lies is the relationship between Levi Abrams and Troy Byrne. These two boys have known each other for a while, but their friendship has become strained. Troy was expelled from Hulbert Academy and the distance has provided some needed relief at a critical time for the adolescents – but some feelings are too strong to deny. 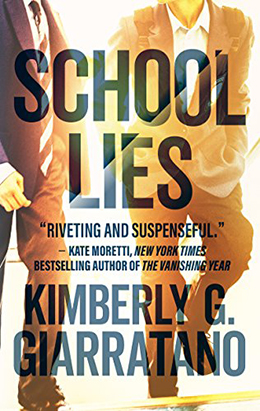 When Levi – who happens to be the son of the headmaster – finds his father’s body on campus, he is not as convinced as the police that it was an accident. Not long after, Troy’s sister goes missing and the two boys must join forces to find her. It eventually becomes clear that these two incidents are potentially connected and that whatever is happening is more wide-spread that either could have predicted.

By setting her novel in the 1990’s Giarratano is able to use her story to document the homophobic attitudes so prevalent at the time. While schools still have a long way to go, improvements have been made and School Lies would have rung a bit false if not presented as a “historical” novel. In many ways, this feels like an evolution from works like John Knowles’ A Separate Peace – that is, a coming-of-age novel in which learning to deal with your peers in healthy ways is paramount. As such, it is crucial to the success of School Lies that readers feel invested in both Levi and Troy. Fortunately, Giarratano makes them easily-relatable, while unique enough to avoid becoming stereotypes.

This is a young adult novel, so some of the developments that may seem telegraphed to veteran crime fiction readers will potentially still provide some surprise for the book’s core audience. Both mysteries – and the eventual conspiracy – are engaging enough, but it is the relationship between the two young men that is the star here. Flashbacks document the various challenges the boys face in a boarding school environment. Adolescence is a time we all remember and everyone understands how difficult it can be even under the best of circumstances, so watching Levi and Troy navigate through these years unable to express who they are, bonds the reader and these characters.

School Lies tells an entertaining story while also teaching us a bit about the long struggles faced by LGBTQ+ individuals within our society. It is important that these stories of diversity are told and readers willing to take a chance are sure to appreciate this emotional journey.