Michael Craft is the talent behind the highly-regarded LGBTQ+ mystery series featuring Mark Manning. Those novels, along with his other writings, have allowed readers to meet multifaceted characters populating engrossing mystery plots. In 2016, he welcomed his readers to the town of Dumont, Wisconsin (in the short story collection, Inside Dumont). While not necessarily a requirement for enjoying his new novel, Michael Craft is now launching a mystery series set in that same small town and featuring many of those same residents.

The new novel is called FlabberGassed and it is as quirky and unique as that title suggests. Putting fan’s minds at ease, FlabberGassed still features Craft’s incisive look at LGBTQ+ culture. The story is told from the point of view of Brody Norris, a gay architect and (mostly) beloved citizen of Dumont. When Miles and Norris, Architects is hired to design the flagship building for a new business selling franchised weight loss clinics, the neophyte architect is more than ready to make a name for himself with an iconic design – while fighting off the subtle romantic advances of the business’s owner, Dr. Francis Frumpkin. 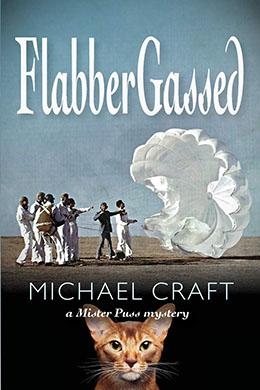 The trouble begins when everyone attends a launch event where Dr. Frumpkin is scheduled to demonstrate his new miraculous weight-loss machine, which will be the calling card for these FlabberGas Clinics – a method that involves the use of hyperbaric chambers and oxygen to enhance the “feeling” of success achieved via more conventional methods like diet and exercise. The only problem is that when the contraption is unveiled, there is a very dead body within.

Since this is a mystery series very much on the cozy spectrum, our narrator – Brody – becomes an amateur sleuth set on uncovering the culprit. Readers will love Brody and his sardonic sense of humor, enviable good will, and non-stop doggedness even in the face of failure. His investigation plays out as readers are shepherded around the confines of Dumont and into the hidden machinations of many of the town’s citizens.

Brody’s doggedness should never overshadow the true star of the novel. FlabberGassed is officially billed as a Mister Puss Mystery because of the major role played by an adorable Abyssinian cat – one who may or may not communicate directly with humans. Michael Craft wisely structures the novel to allow readers to make their own decisions about how much Mister Puss is actually interacting with Brody, but there is no doubt that things would turn out very differently without him around.

This all should clue readers in to the fact that FlabberGassed is a book that never takes itself too seriously. It’s a light-hearted tale – as only a cozy mystery featuring murder can be. As the start of a new series, Craft introduces readers to all variety of local citizens. Dumont could very well become as beloved by its fans as St. Mary Mead and Cabot Cove. Fans of offbeat ambiance, animal-centric tales, and unforced diversity will find much to enjoy in FlabberGassed.