Beyond the Truth – The BOLO Books Review

Fans of police procedurals should definitely be reading the books of Bruce Robert Coffin. His Detective Byron mystery novels set in Portland, Maine present accurate depictions of all aspects of the law enforcement profession and they continue to grow stronger with each new book in the series. Beyond the Truth, the third book featuring John Byron, was recently released and fans of both the character and his creator are rejoicing.

Beyond the Truth opens with an extended, cinematic scene that plays out like a classic cop drama. Officer Haggerty is called out to a robbery in progress. With two teens on the run from the scene, readers feel like part of the action even as it becomes increasingly clear that this volatile situation is about to escalate. When that happens, one suspect escapes while another lies dead.Our series namesake – Detective John Byron – is called to the scene and begins the difficult and unenviable process of investigating this incident. Since this is a realistic police procedural series, readers watch as evidence is examined and witnesses interviewed in the hopes of piecing together the truth – or at least some semblance of the truth. But just as in real life, this difficult task requires patience and open-mindedness. With the suspect/victim being a celebrated teen athlete, it makes sense that this investigative path leads to the school system and the many anxieties facing today’s youth. 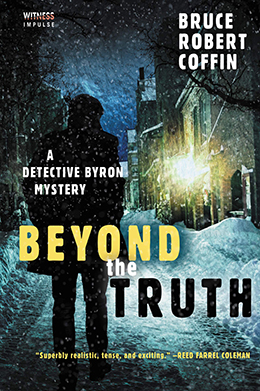 Readers of the series know that Detective Byron has his own demons to deal with and these personal struggles inevitably affect his ability to successfully maintain his high standards, but fortunately – for both the characters in the book and for the readers themselves – Byron has surrounded himself with a quality team who possess similar goals and who are committed to helping Detective Byron.

By starting Beyond the Truth with the type of incident that has become all to common in our modern society – this police involved shooting – Bruce Robert Coffin, himself a retired detective sergeant, allows his fictional plotline to defy the expected course, allowing readers to experience the varying angles of investigation and to learn new things about this commonly misunderstood and often unfairly maligned part of the difficult role played by our law enforcement personnel in today’s violent society.

Beyond the Truth is not afraid to face the difficult questions and shows that as much as we would like for them to exist, easy answers are rarely possible. At times the book is difficult to read, as Bruce Robert Coffin navigates readers through a wide variety of assumptions and expectations before ripping the rug out from under them with an emotional sucker-punch of an ending. The writing here is always laser-focused and often reaches the plateaus of poignancy rarely seen in the police procedural sub-genre.

Readers are forced to come away from Beyond the Truth with new insight into the challenges faced by those whose day-to-day job it is to keep us safe. Everything from government bureaucracy to public mistrust are daily adversities that must be addressed even before the path to justice can begin. Fortunately for fans, Beyond the Truth ends with a turning point that should make future chapters of John Byron’s story fascinating to experience.

Buy Links: Beyond the Truth by Bruce Robert Coffin