Liane Moriarty continues to write novels that are virtually unclassifiable – blending elements from women’s fiction, mystery, suspense, romance, inspirational, and more into a style that is uniquely her own. If her latest novel, Nine Perfect Strangers, had to be categorized as anything, this massive mosaic of styles and tones would most closely resemble satire.

Nine Perfect Strangers begins with a high-powered businesswoman suffering a massive heart attack in her office surrounded by her closest confidantes. Very quickly, the novel shifts to a collection of individuals traveling from various locations and lifestyles to converge upon the Tranquillum House Health Spa for a ten-day retreat. 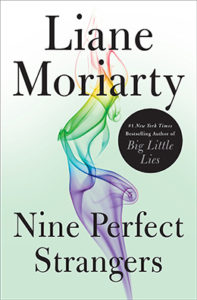 While each of these people is unique and interesting in their own way, much of the joy to be experienced is found by learning about them through the process of reading, rather than being told about them in a review. Suffice to say, there is the standard mix of women and men; old and young; gay and straight; rich and poor; high-strung and relaxed; famous, infamous, and unknown. How these traits fit together is Moriarty’s secret weapon here.

In addition to these nine strangers (who technically are not all strangers), there is also the staff at the clinic. Marsha, the head of the Spa is probably the most fascinating of all, but each of the three who get focused on bring complicating elements to the overall plot. Given that Nicole Kidman has already optioned the film rights for Nine Perfect Strangers, it is hard to imagine that she would be thinking of any other role besides Marsha for herself.

It will shock no one that Tranquillum House is hardly the vacation retreat these individuals expected. Shortly after arriving, they are told that the first half of the ten-day package involves a vow of silence. This necessitates Liane Moriarty using extensive internal monologue for this section of the book, which may not please all readers. It also means there is a fair bit more “telling” and not enough “showing,” so the style definitely takes some getting used to.

Without giving any spoilers, all I can say is that the plot seems to be based on some actual health studies and reactions to how serious that should be taken will be as varied as the readers who call themselves Moriarty fans. There is a fair bit of trauma to be dealt with in this group – much of it very heavy and intense – so readers should proceed with caution. Liane Moriarty is not going to tell her audience where the line between reality and satire lies, that is for every reader to judge on their own – and in point of fact, that line may not be the same for every reader based on their own personal life situations.

It would be impossible the claim that Liane Moriarty is writing the same book over and over and riding on her past successes. Nine Perfect Strangers is a different book and opinions on it will be vastly disparate, but likely most of her fans will enjoy the wild and unexpected ride.

Disclaimer: This review is based on the audio version of the book.