Last Friday, BOLO Books posted a review of Seven Kinds of Hell by Dana Cameron.  Today, we are pleased to be joined by Dana for an interview about the novel, the inspiration, and other writing-related topics. 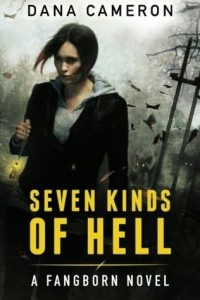 BOLO Books:  The first appearance of the Fangborn was in your award-winning short story, The Night Things Changed (from the Charlaine Harris- and Toni L.P. Kelner-edited anthology Wolfsbane and Mistletoe).  Can you tell us how you came upon the idea of the Fangborn?

Dana Cameron:  Sheer panic!  I was thrilled to be asked, and then the huge task of doing something original, with my stamp on it, became apparent.  I was so used to 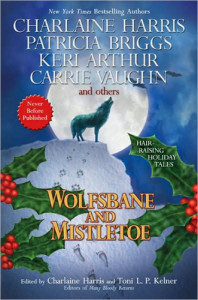 writing academic non-fiction or very realistic crime fiction, that it took a while to realize I could make something up!  I ended up turning traditional conventions on their heads, making the Fangborn secret superheroes, dedicated to protecting humanity and fighting evil.  Werewolves track down evildoers; vampires don’t drink blood, but alter its chemistry to heal and conceal.  I took a leaf from Joss Whedon’s “Firefly;” the name “Fangborn” comes from both vampires and werewolves having fangs, combined with the idea they are born, not bitten, into the same Family.  “Fang” plus “born” equals “Fangborn.”

BOLO Books:  I read that an archeological trip with Tess Gerritsen to Turkey helped you to come up with a way of moving the Fangborn from short stories to novel form.  Can you elaborate a bit more on that trip?  Can you give an example of how something from the trip made its way into the final novel?

Dana Cameron:  The trip was in 2009, my first time in Turkey—and it was amazing!  It was a cruise up the Aegean coast, stopping at many wonderful archaeological sites—mostly classical—along the way.  The scenery was staggering, the people welcoming, and the food—wow!  But it was the spectacular archaeology and history that spoke to me.  Cities stood on the high ground, within sight of the next town up the coast—you really got a feel for how these places functioned several thousand years ago.

One site in particular, the temple at Claros, spoke to me.  It was not the grandest site, by any means, but it was an important temple dedicated to Apollo, and the remains of the structure under the temple are still standing.  This was where the oracle would have been, and if you had a question, you’d leave bright daylight and descend into the tunnels under the temple, which got narrower as you proceeded.  You’d be left in the dark to wait for the oracle, who might answer your questions by singing, or in verse.  It was an archaeology geek moment for me, the notion of the “theater” of the oracle; I instantly had an idea (right or wrong) of what it was like to walk into that place as a supplicant.  It made such an impression on me that the site is featured in an important scene in Seven Kinds of Hell.

BOLO Books:  Seven Kinds of Hell is being classified as Urban Fantasy and as with all forms of categories that can pose some problems.  For me, Urban Fantasy is just a sub-genre of the thriller.  How do you feel about the category and do you worry that it might limit your exposure to some potential readership?

Dana Cameron:  Seven Kinds of Hell started off as an archaeological thriller that Tess Gerritsen was encouraging me to write.  I tried, and it really wasn’t gelling, but I couldn’t throw it out entirely because something was there.  After the short stories, I’d also been playing with the idea of a Fangborn novel, and suddenly, I realized I had two halves of the same book:  my archaeologist, Zoe Miller, didn’t know she was a werewolf, and Fangborn.  Suddenly it all started to work!  It was kind of awesome, and a little scary, how the two pieces snapped together, and the book ended up being an urban fantasy with a thriller structure.

Whether it’s “just” a sub-genre…I’m not sure I agree.  For one thing, there are a lot of urban fantasies that are crime novels, but not thrillers, necessarily, because the structure and the way the timing works is different.  And there are some urban fantasies that are romances, and some that are quest-type fantasies, all of which may have some thriller elements.  I agree that the two genres are related, and I’ll go so far as to say I think the elements that go into a thriller (a larger-than-life hero, world-threatening danger, army of villains) are very similar to UF, and that sometimes the arrangement and exaggeration of those elements in the thriller can be so extreme as to be nearly fantasy.

I think the UF category is useful; it lets people know what to expect.  Some people can’t abide supernatural creatures, and that’s fine, a matter of taste.  But if they dismiss urban fantasy because they imagine the writing is somehow compromised because there is magic or supernatural creatures involved, that’s just prejudice.  Monsters and magic were good enough for Homer, Shakespeare, and Mary Shelley; I’m not comparing myself to them, but I’m happy to take my cue from them.

BOLO Books:  I completely agree.  “Just” was probably not the right word choice, but my main point was that I don’t want people to write off the UF genre as not-their-thing, until they have at least given it a shot.  Since it is comprised of so many different genre elements, they might find they enjoy it.  And if not, that’s ok too.

The plot of Seven Kinds of Hell causes Zoe to do some serious traveling.   I have no doubt that with your background in archeology, you have done some extensive traveling.  Have you been to all the places that Zoe went in the novel?

Photo of the Library at Ephesus. Courtsey of Dana Cameron

Dana Cameron:  I have, but not for work!  My specialty was historical archaeology, focusing on colonial New England, so I spent nearly all my time working and researching in the Northeast.  I had plenty of adventures sticking close to home!  The exception was the year I spent in London, when I got to know the Romans pretty well, and got familiar with the Vikings. Later, I returned to England do my own research on 18th-century social history.  But the other places in the book—Paris, Berlin, and sites in Greece and Turkey—are places I’ve visited, some many times.You never get over being an archaeologist.  You look at the world through that lens forever, and when I’m traveling, I’m paying attention to what the people do, how they talk about certain things, the music, the architecture and city layout, and yes, the food.  So my notebook comes with me, even if I’m traveling just for pleasure.

BOLO Books:  Is there any location that you have yet to set a story that you would love to – either because you have been there and know it will be perfect or because you want to go there and the excuse of “research” is hard to resist?

Dana Cameron:  We’re going to Japan in the spring.  My husband and I have been talking about it for decades, and now time, money, and a good excuse are all overlapping.  I studied Japanese language and culture ages ago, but have never been.  It’s going into my writing.  I’d love to go to New Zealand, and Portugal; I’m dying to go to Egypt, Israel, Jordan, too.  China is another place—but I’m also dying to go back to Alaska and Sweden.  There’s a lot of travel I’d like to do, but time, deadlines, and real life are slowing me down!

BOLO Books:  The plan is for the Fangborn novels to be a trilogy.  Do you already know where thie story arc is going in each book?  Do you see potential for further novels or short stories in the future?

Dana Cameron:  I have a rough idea of where the arcs are going within and over the course of the three books.  I’m not an outliner—it really kills the writing for me to pre-plan it.  All I need is a few words to keep me on track, but there’s a lot to explore within that.  For example, in Seven Kinds of Hell, Zoe learns who she is, and in the next book, she learns more about the Fangborn, but as her powers grow, so do the obstacles and her problems!

There’s an option for a fourth novel, and I think I have a notion of where that will go.  And 47North will be publishing Fangborn short stories between the novels—three in all.  I have a few more Fangborn and other stories in the works, too, so there’s lots of Fangborn in my future!

Photo of a market in Turkey. Courtesy of Dana Cameron

BOLO Books:  You have won many different awards for your short stories.  What do you think the keys are to writing a successful short story?  Do your prefer the short story format or the novel format?

Dana Cameron:  Thank you!  The mystery community has been so wonderfully generous and supportive of the different things I’ve tried—the Agatha, Anthony, and the Macavity wins, and the Edgar nod have meant the world to me.  Short stories have given me opportunities to stretch my wings.  I think strong emotion can really make a short story.  Because I’m so intimidated at the beginning of most short stories, I can turn that into something useful on the page.  Making words count, of course, is a big deal, so that everything you write is doing double and triple duty.

As for short stories versus novels:  It depends on my mood.  A novel, you live with for months or years.  But you get to stretch your legs, and it’s a lot of fun to work on a big canvas, with a lot of different, big ideas and complexity.  A short story will only be a WIP for days or weeks, and that’s very freeing.  You can try out something new without the burden of it taking over your life.

Dana Cameron:  Aiyee, that’s a tough one!  I’m going choose option 5, which is I’d opt to have my reading material transplanted into a chip in my head, so I’ll always have it with me.  But in real life, I buy in multiple formats; I like hardcovers and paperbacks because I can get them signed.  I like to have books in physical form too, because so many of them have a sentimental connection for me, taking me back to a time and place.  On the other hand, I’ve only got so much room in my house, so limited shelf space and all that traveling got me addicted to the ebook.  I used to take a dozen or more paperbacks with me, but now I take just one—to read when the plane is taking off and landing—and load up with ebooks before a long trip.

Thanks so much for having me at BOLO Books!