Sometime in 2008, Dana Cameron was contacted by her friends Charlaine Harris and Toni L. P. Kelner.  They wanted her to submit a story for their new anthology, Wolfsbane and Mistletoe.  Since the story would require the combination of a holiday setting and werewolf characters, Dana was entering new writing territory.  The resulting short story, “The Night Things Changed,” went on to win multiple industry awards and heralded the arrival of the Fangborn.

Now five years and several more short stories later, the release of the first Fangborn novel is upon us.  Seven Kinds of Hell is the story of Zoe Miller, an archeologist who just happens to be a member of a secretive race of shape-shifters who have been tasked with protecting humanity. 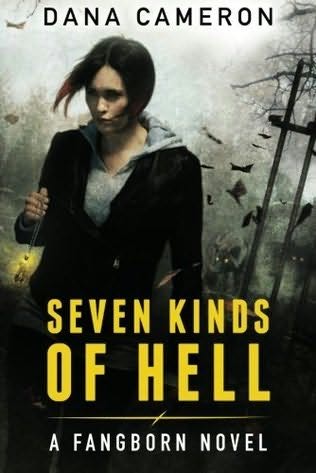 The pace of the story kicks into high gear right from the start.  While at the funeral of her Mother, Zoe is chased by a group of adversaries which forces her to confront “the beast” within herself.  This “beast”, as she calls it, is a secret she has been keeping and struggling with for years.  On the run now, she realizes that not only is she in danger, but so are other members of her family and her friends.  In order to protect them, she must embrace her true self and find answers to the questions she never knew she should be asking.

Seven Kinds of Hell is very much an Urban Fantasy novel, but it also shares many trademarks with other genre novels, such as mysteries and thrillers.  Below, you will find a few more literary genres to which Zoe’s story could easily be a part.

Zoe’s search for antiquities, which may or may not be the keys to open Pandora’s Box, position Seven Kinds of Hell very much in the mold of the quest novel.  In these novels in which the main action derives from characters searching for physical objects, it is often very much about the journey and this book is no exception.  Zoe travels to multiple locations throughout the novel, including Germany, Greece, and London and each location gets her a step closer to understanding who (or what) she is.

Bildungsroman is a term that is typically used to describe Victorian-era novels that document the coming-of-age story of a main character, such as Jane Eyre or David Copperfield.  However, if defining the term as a “formation novel”, Zoe’s journey also qualifies.  At the beginning of the novel, she has no idea what exactly she is and throughout the events of the story, she comes to understand much more about herself and her nature.

A mythopoeia is a narrative form in which the author creates a new mythological history as the background for a novel.  The Fangborn are exactly that.  By using her background in archeology, Dana Cameron is able to present a reason for creatures such as vampires, werewolves and oracles to mingle amongst common humans.  In various sections of the novel, she hints at the ways that Fangborn have been represented throughout history.  For example, in looking at the Sphinx it is easy to see how this monument with the body of an animal and face of a human could easily be a tribute to an Egyptian shape-shifter.

In the end, however, Seven Kinds of Hell is simply a very good book that will keep you turning the pages long into the night.  As this is the first in a trilogy, there are still many questions to be answered, but readers will be excited to follow Zoe on her path of discovery.

(Note: For Fangborn fans, the novel also brings back Gerry and Claudia Steuben, who are favorite characters who first appear in some of the short stories.)

Scheduling Update:  Please join us here at BOLO Books on Tuesday, March 12, when Dana Cameron will join us for an interview which will give us more insight to her new Fangborn novel.