Thomas Mullen’s Darktown is an important book. Inspired by – and dedicated to – the legacy left by the first eight African-American officers hired by the Atlanta police department, the novel does much to explain the problems of institutionalized racism inherent in law enforcement today. That Darktown manages to tackle this massive undertaking without ever losing sight of its main goal of telling a compelling and concise story for entertainment purposes is a testament to its brilliance.

By setting Darktown in 1948 Atlanta, Thomas Mullen is able to explore an often overlooked part of our history: a time when our nation was ever-slowly approaching the dawn of the civil rights era and all of the turmoil such a seismic shift needed to unearth in order to have a chance at success was just beginning to surface. If this seems an unrealistic goal for a one-off novel, rest assured that Darktown is the start of a series destined to explore the issue of race across these noteworthy years.

Distilled to its simplest form, Darktown is the story of two African-American cops who stumble upon knowledge that a white man may have been involved in the disappearance of a black woman – and that some white officers may be aiding him in a cover-up of the crime. This may not seem like a plot destined for masterpiece status, but the way that Thomas Mullen interweaves historical details about the treatment of these black cops elevates the material above many police procedurals. 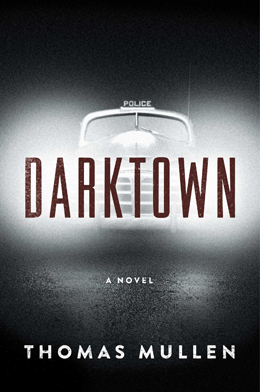 For all intents and purposes, these African-American police officers were mere security guards compared to the “real” police professionals. These officers were forced to meet in their own squad room away from police headquarters, they were not allowed to arrest white citizens, and they faced direct opposition at every turn. At the same time, they are confronted with hostility from the black community they are sworn to protect. They are viewed as suspect simply because of their chosen profession which is still seen as the domain of the white man. As Mullen documents how the white cops flaunt their power in the predominately black neighborhoods of inner-city Atlanta (specifically an area known as Darktown), it is impossible not to correlate that with our current crisis in law enforcement.

But Darktown is not a pedantic exercise intended to place blame by demonstrating the moral superiority of any one character over others. Thomas Mullen has written a novel that entertains and educates in equal measures. Every detail feels authentic and vital to the central plot. It remains to be seen if this can be sustained across a series, but by the end of Darktown there are still many angles from which to examine the integration of the police force and its effect on the populace.

In a year when the literary community has seen some stellar releases examining the issue of race in unique ways – books like Underground Airlines by Ben H. Winters, Colson Whitehead’s The Underground Railroad – Darktown stands beside Revolver by Duane Swierczynski as examples of how crime fiction can elucidate the topic with pinpoint accuracy. This novel should be required reading for both police forces nationwide and the citizens they seek to protect.