Did You See Melody? – The BOLO Books Review

Motherhood has been a recurring theme in Sophie Hannah’s crime fiction oeuvre from the very beginning. In novels like Little Face, The Cradle in the Grave, The Orphan Choir and A Game For All the Family, among others, Sophie Hannah has dissected the various permutations of the maternal dynamic. An academic scholar could – and should – write a compelling thesis analyzing her depictions of this very complex subject matter. Her new novel, Did You See Melody?, once again places motherhood in the crosshairs in classic Sophie Hannah style. 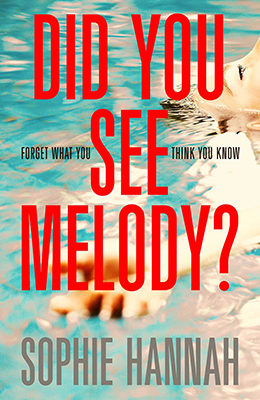 Did You See Melody? opens with Cara Burrows arriving in Arizona after leaving her family in the UK without much more than a note. The reason for her fleeing is just one of the many mysterious elements in the novel. When that reason is ultimately revealed, it is so simple and yet perhaps one of the most complex reasons possible.

Upon arriving at the Swallowtail Resort and Spa, Cara is too exhausted to notice that the hotel room she has been assigned is already occupied until she walks in on a sleeping man and child. What she sees reignites one of the countries most controversial stories – the murder of seven-year-old Melody Chapa. For in that room, Cara has seen a girl who just might be Melody Chapa.

The first half of Did You See Melody? is told exclusively from Cara Burrows point of view. Readers are granted access to both her thoughts and actions as she tries to come to terms with not only her personal dilemma , but also this confusing turn of events in a nationwide crime story. Through the use of television transcripts, newspaper articles, and witness testimony during the trial, readers are slowly given the backstory on the Melody Chapa case. 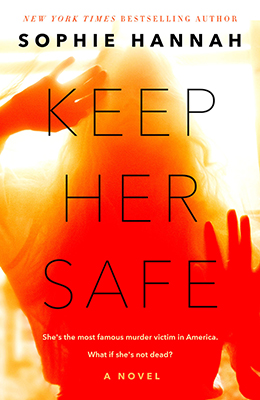 At the midpoint of the novel, plot developments require that Sophie Hannah shift point of view so that now readers are lead through the remainder of the story from multiple angles – including, Cara, the detectives working the case, other guests of the resort, employees at Swallowtail, and those involved in the original investigation years prior.

Among those is Bonnie Juno, a Nancy Grace-like investigative journalist who made a career out of following and reporting on criminal cases such as the Melody Chapa case. By introducing this element, Sophie Hannah is able to address the public’s strange fascination with every sensational detail in criminal investigations and the ensuing trials.

Through all of this, Did You See Melody? keeps readers turning the pages with each new revelation. Sophie Hannah is not known for her straightforward narratives – fans of her work are used to tracking along with the most twisted of psychological profiles – but here she shows skillful restraint in allowing Cara’s tale to unfold at its own pace. This novel is another fine example of domestic crime fiction, this time told outside of the home setting and placed in the closed setting of a premier resort where everything and everyone is suspect.

Did You See Melody? by Sophie Hannah (UK edition – out August 24)

Keep Her Safe by Sophie Hannah (US edition – out September 19)