Wonder Valley is a desert oasis nestled in the backcountry of California; and yet, it is also a mirage – both corporeal and elusive. Although it is an Eden-like sanctuary, temptation, betrayal, and happenstance threaten to disrupt its mercurial equilibrium. Not unlike the island of misfit toys, Ivy Pochoda’s Wonder Valley features a cast of characters residing on the outskirts of society – at the intersection of invisibility and inferiority – always in a constant battle to belong.

Wonder Valley begins with an effective tableau documenting the escapades of a naked runner dodging cars on the crowded Interstate 110 around Los Angeles, California. Even more than the runner himself, readers are introduced to a number of spectators at various locales along the highway. These are the folks that will become the core of the novel – the beating heart of Wonder Valley (and Wonder Valley.) 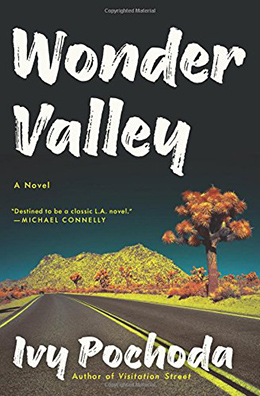 But the story really begins years earlier, when one of Patrick and Grace’s twin sons decides to flee the commune his parents began in Twentynine Palms. Escaping the only home he has ever known seems like Owen’s only choice at the time, but the universe has other plans. This simple act of rebellion with put into orbit a series of life-changing events no one could have foreseen.

Ivy Pochoda may not be a prolific as many of her contemporaries in the crime fiction genre, but her ambitions are aimed no less high. Wonder Valley is an epic novel told on a personal level. Each of the characters in this novel resonates with traits familiar to all readers, and yet every one of them is a unique individual. No two readers will have the same experience reading Wonder Valley. By focusing on those at the fringes of society, Pochoda effectively examine both the flaws and perfections of humanity at large.

Wonder Valley is a crime novel, but it is also a postcard portrait of California – or at least a specific part of this most diverse state. The literary moniker is not one I particularly like to employ, but if readers compare Wonder Valley to other equally strong crime novels, what may emerge is an understanding that every novel has its own unique fingerprint – some are striving for a universality that is more sweeping than others, which doesn’t make them “better,” just different. When done successfully – as Ivy Pochoda does with Wonder Valley – the ultimate winner is the reader.