Pieces of Her – The BOLO Books Review

If you told me that I was about to read a book with a plot that encompasses sexual politics, domestic violence, workplace discrimination, mental health regulation, heath care reform, world political strife, gun violence, and a few other huge – but spoiler-y topics – I would say “good luck with that.” But if you then told me this book was written by Karin Slaughter, I’d say “hell yes, sign me up.” Such is the road traveled by Pieces of Her, Slaughter’s new stand-alone thriller – and even with all those grandiose concepts woven within, the novel remains a very intimate story of two women trying to survive in a harsh world.

Pieces of Her begins innocently enough with a typical mother/daughter lunch at the local mall. These moments between Andrea – Andy – Oliver and her mother, Laura, are like many such exchanges: some simple catching-up, a few little white lies to avoid conflict, and an all-consuming sense of unconditional love. But when the serenity of the moment is shattered by an act of violence all too common these days, both lives spiral out of control. Andy watches as her mother reacts in completely unexpected ways, while Laura has only one thing on her mind – protecting her daughter. 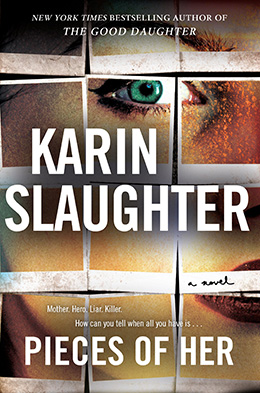 With this set-up, Karin Slaughter sends Andy Oliver on a cross-country journey in which she uncovers the truth about her mother while also excavating this uncertainty to find new-found confidence and levels of self-realization she never knew were possible.

Pieces of Her clocks in at 450+ pages, divided into sixteen chapters. By writing long sequences, Karin Slaughter manages to immerse her readers into the story of these two women so deeply that these characters really do feel like living and breathing human beings. By setting the contemporary scenes around the very date the book is released, she adds an immediacy to the proceedings, which makes the 1986 historical flashbacks somehow more authentic and no less captivating.

Those scenes from the past are set in Oslo, Norway and tell a tale that is completely unexpected at the start of Pieces of Her. It is to Karin Slaughter’s credit that when those revelations are made – well into the novel – readers completely buy into them and fall for the authors skillful manipulation at the same time. In fact, those chapters are some of the most gripping and tense exchanges found in the novel. Many authors would have just written that story and called it a day, but Slaughter wants to go a few steps further and show the long-term effects of choices made and decisions rendered.

To say too much would spoil the process of discover for the future readers, but suffice to say that Karin Slaughter merges global fanaticism with individual responsibility in a way that brings the complexity of the human condition to the forefront without being trite or melodramatic. The long chapters begin to fly by more quickly the closer the reader gets to the final surprises and when the end is reached, readers will find it challenging to leave these characters behind.

Everyone has read books about how difficult it is to really know another person, how secrets have a way of being uncovered, and how we lie to ourselves to maintain sanity, but somehow, Karin Slaughter makes those ideas seem fresh and relevant once again. Pieces of Her is a book that will linger in the memory for years.

Buy Links: Pieces of Her by Karin Slaughter

Disclaimer: A copy of this title was provided to BOLO Books by the publisher. No review was promised and the above is an unbiased review of the novel.