Mary Kubica’s debut suspense novel, The Good Girl, is often compared to last year’s smash success story, Gone Girl.  Regardless of your feelings towards that Gillian Flynn novel, don’t let The Good Girl pass you by.  There are some similarities, but The Good Girl is more than just a shadow of this earlier novel.  Mary Kubica manages to present readers with a deep character study, a suspenseful plot and an original structure – all while keeping the momentum going in this quick summer read.

The good girl of the title is Mia Dennett.  One evening, when she makes an unfortunate decision, she finds herself held captive by a man she met at a local Chicago bar.  Even though she is the second daughter of a prominent Judge, the reason for the abduction remains unclear.  Readers do quickly learn that Mia makes it back home – but how has this event affected her?  Such a traumatic situation is destined to have ramifications not only for Mia herself, but also on those closest to her.

Mary Kubica structures The Good Girl to extract the maximum amount of suspense possible from her plot.  By manipulating the timeline, she keeps readers speculating about the true nature of Mia’s abduction.  What exactly happened during those months in that log cabin nestled in the snowy woods?  Events from before the abduction are mingled with tales of what happens to Mia after she returns home.  Chapter after chapter, the reader is required to re-position themselves within the established timeline.  Kubica manages to keep this from getting confusing by using very clearly identified designators of “Before” and “After.” 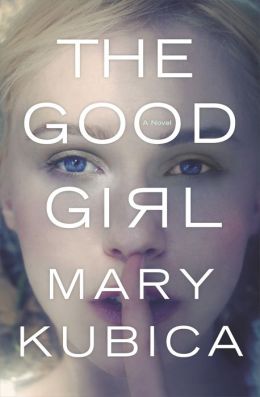 The Good Girl by Mary Kubica

It should be pointed out that, at the same time, none of these events are told from Mia’s perspective.  There are three point-of-view characters through whose eyes the reader gets to know Mia Dennett.  These characters are:  Mia’s mother Eve; the police officer assigned to the case, Gabe Hoffman; and Mia’s abductor, Colin Thatcher.  Through the eyes of these three characters, the reader begins to understand who Mia Dennett is.  The reader is always acutely aware that The Good Girl is still Mia’s story, but each of these three point-of-view characters is also well-developed and interesting in their own right.

Looking at the cover design and the internal typesetting, readers can see this idea played out in the typographical treatment used.  Notice that the “R” in the title (and the chapter headings) is reversed.  This is a physical representation of the dual timelines – “Before” and “After.”  But the “R” is also a mirror image, which could easily represent how the character of Mia is reflected to the reader through the voice of those around her.  It is only in the very last chapter that Mary Kubica allows Mia to speak for herself.

Much will likely be made of the last-minute twist in the plot, but rest assured that the power of The Good Girl does not rely solely on this revelation.  Even if the reader anticipates this development, as I did, the tale loses none of its impact.  The Good Girl is an accomplished suspense debut and will leave readers clamoring for Mary Kubica’s next offering.