In Land of Shadows, Rachel Howzell Hall does for Los Angeles what Laura Lippman has done for Baltimore. Yes, that means that she is revealing the underbelly of the city – the less polished façade – devoid of the allure most tourists are attracted to. But more importantly, she lets readers see the city through the eyes of a kick-ass female protagonist who is completely part of the community and yet, slightly outside it because of her career path. In short, Elouise Norton and Tess Monaghan would be great friends!

Land of Shadows is Rachel Howzell Hall’s first foray into writing a mystery series, but readers will feel as though they are reading the work of a genre veteran. Much has been made of the lack of diversity in crime fiction today – and most of it is indeed valid. In fact, Rachael Howzell Hall has written on the topic for The Life Sentence. While it cannot be denied that featuring African-American protagonist Elouise Norton does place an important check in the “diversity-in-crime-fiction” column, the story line itself puts check marks in all the important columns of a good read: plot, character development, story arc, setting, and entertainment. Land of Shadows is a book that will appeal to all fans of the genre simply because it is authentically written, deceptively complex, and wholly consuming. 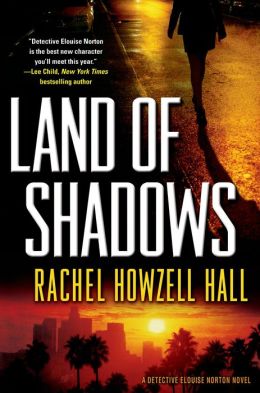 Elouise “Lou” Norton is a wonderful addition to the canon of female homicide detectives. Her voice is one that is fresh, credible, and at times laced with wit and humor. The dynamic between Lou and her new partner, Colin Taggert, is engaging and original. Colin recently relocated from the Colorado Springs Police Department, so it is safe to say that he is unprepared for his role as an inner-city detective. Yet, Hall manages to show that not only does Colin have much to learn from Lou, but Lou can take some lessons from Colin as well.

Their first case together involves the hanging death of a teenage girl. Found at a building construction site, Monique Darson, had no real reason to take her own life and it isn’t long before Lou has everyone convinced this was murder. Complications arise when the main suspect in the case turns out to be the same man who Lou believes was involved in her own sister’s disappearance years earlier.

That suspect, Napoleon Crase, takes on a mythic quality because Rachel Howzell Hall skillfully keeps him off-stage for two-thirds of the novel. By the time Napoleon appears on the page, readers will be ready to convict him. However, as in life, things are never as cut and dried as they may seem and there are many intertwined threads that must be untangled before true justice can be meted.

Throughout the novel, the reader gets glimpses of Lou’s personal life. For years, she and her family have longed for closure in her sister’s missing persons case. Currently, Lou’s marriage is on rocky ground and just one misstep away from total collapse. Thankfully, Lou has some good friends who have her back at all times and their scenes together feel genuine and readers will look forward to future interactions with these characters.

The theme of the shadow self – that part of ourselves that we never reveal to anyone, sometimes even ourselves – weaves its way through both the main investigation and the sub-plots within Land of Shadows. This is the work of a pro and because of that, Rachel Howzell Hall has amassed a loyal fan base ready to follow her and Elouise “Lou” Norton through years worth of investigations. The second book in the series, Skies of Ash, is already available.