The best crime fiction often reflects on the society in which we live. Few authors can so successfully tap into the zeitgeist as can Val McDermid. With Splinter the Silence, McDermid returns to her most popular series characters – Carol Jordan and Dr. Tony Hill – and places them smack dab at the intersection of crime, culture, and technology.

When last readers encountered Jordan and Hill in Cross and Burn, these two beloved protagonists were certainly not in a very good place. Tony Hill had been accused and ultimately exonerated of a serious crime; while Carol Jordan continued her struggle to find a way to accept the untimely death of her brother. Carol now lives in her brother’s isolated home, while Tony rests his head on his houseboat. Distanced from each other, it had seemed as though this pair had reached their lowest point. 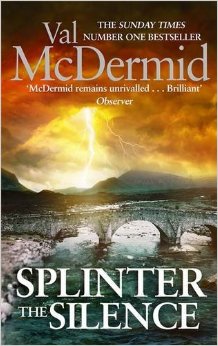 Splinter the Silence by Val McDermid

Until the night, at the start of this new novel, when Carol Jordan leaves a dinner party to drive the short distance back to her abode. Having had a few drinks, everyone tries to stop her from leaving. Always hard-headed, Carol brushes it off and is ultimately arrested for drunk driving. With nowhere else to turn, Carol calls Tony.

Meanwhile, London society is abuzz over a rash of suicides by high-profile women. These out-spoken activists have previously been viciously cyber-bullied by online trolls simply because they dared to have and state their opinions. Could the books found near their bodies foretell of something more sinister?

These two storylines will soon clash in a way that will delight fans of Val McDermid and her much-loved characters. Without revealing too much, rest assured that all of the Bradfield Metropolitan Police Department is back and working together in a new and unexpected way.

It is no secret that Val McDermid has long been a critic of violence against women and here she wisely charts new territory in that fight. Online stalking, bullying, and abuse are at an all-time high. Every day, vicious words are slung at victims – mostly women – by cowards who hide behind the veil of anonymity. It is not much of a stretch to believe that this type of thing could, and probably has, escalated from online taunting to real life physicality.

Yet, even with this timely plot, it remains Carol and Tony who represent McDermid’s greatest achievement. Readers have come to cherish their strange and undefinable relationship. It has been far too long that they have been at odds, so it is finally nice to see them on the same side again – at least temporarily. The bond these two have is built firmly on a foundation of respect and reliance, which is the exact opposite of what the online interactions at the center of the mystery reflect. It takes a writer of McDermid’s skill to marry fleshed-out characters with a cutting-edge plot without straining credibility. 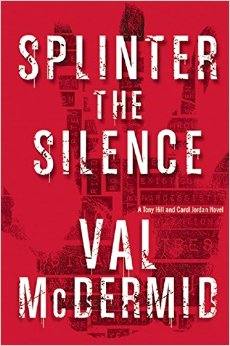 There is one plot development which some readers may at first find a bit unrealistic, and yet by the end Val McDermid shows that even the best intentions have unforeseeable consequences. For the long-term viability of the series, this decision was necessary and readers should trust that Val McDermid will explore the aftermath – both the good and the bad – in future novels.

If Splinter the Silence teaches us anything, it is that words and actions always matter and that everyone is entitled to an opinion – regardless of who they are. It’s only when one’s opinion attempts to stifle the voice of others that the trouble begins. Don’t miss this exciting addition to the mythos of Carol Jordan and Tony Hill.