A novel set in a private school and featuring a cast of elite ballet students is probably not the first thing that comes to mind when you hear the term thriller. However, that is exactly what Cate Holahan has delivered with her debut novel, Dark Turns.

Dark Turns is the story of Nia Washington, an African-American ballerina who, because of an injury, has taken up a teaching position at an exclusive Connecticut boarding school called the Wallace Academy. While on a campus tour with the ballet department’s director, the body of a student is discovered floating in a fountain. Even though it is Nia first day, she already feels an affinity for the students and worries that more of them may be at risk.

Although Nia’s first brief encounter with English professor Peter Andersen is hardly cordial, as she continues to bump into him around campus, her attraction to him begins to grow. Eventually, after the police make an arrest, the two of them band together to prove that the dead girl’s ex-boyfriend was not guilty of killing her. 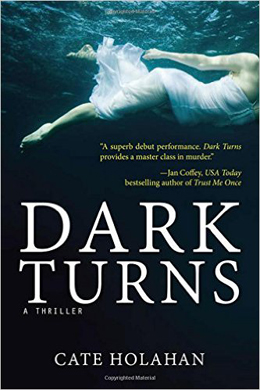 Meanwhile, Nia is also dealing with casting and rehearsing the next big school ballet production. All the girls want a part and the in-fighting and gossip mill are at their peak. Particularly vicious are the interactions between the two most promising students, Aubrey and Lydia. It seems like these dancers are willing to do just about anything to get what they want.

The cast of characters in Dark Turns resembles a Benetton commercial with all of its diversity, but to Cate Holahan’s credit, she manages to avoid many of the stereotypes readers might expect. It was particularly nice to see a person of color in the lead role, but in such a way where Nia’s race never really factors into the plot.

Cate Holahan starts each chapter with a term from ballet culture, along with the formal definition of that term and the phonetic pronunciation. This does serve to immerse the reader in the world of dance, but it was not always clear how the term related to the chapter that followed. This is a minor quibble because in the cases where the term did relate to the following chapter, the technique was extremely effective.

Readers are sure to be reminded of various movies with ballet at their core: The Turning Point, Black Swan, and Center Stage come to mind. As one would expect, Dark Turns goes to some of the darker places those films also explored, but not in a way that never feels derivative. It is worth point out that while this book does feature younger students, it is not a young adult novel. Probably the best classification of it in today’s marketplace would be the newly created category, New Adult. Of course, as with all good writing aimed at younger audiences, adults will enjoy Dark Turns as well.

Cate Holahan brings everything to a satisfying – and in some ways an unexpected – conclusion, making Dark Turns the perfect book for those who desire a fast-reading stand-alone tale. Cate Holahan’s next novel, The Widower’s Wife, will be out next summer.