Gillian Flynn’s short story “What Do You Do?” first appeared in the George R.R. Martin-edited collection, Rogues. Capitalizing on her current popularity, Crown has repackaged the story as a slim stand-alone volume, now called The Grownup. Whatever you call it and wherever you read it, Gillian Flynn certainly demonstrates her ability to craft a tight short story.

The Grownup is the story of an unnamed thirty-year-old female sex worker who finds a second “career” in faux fortune telling. As is wont to happen, the fake fortune telling eventually turns into more elaborate hoaxes involving the supernatural. 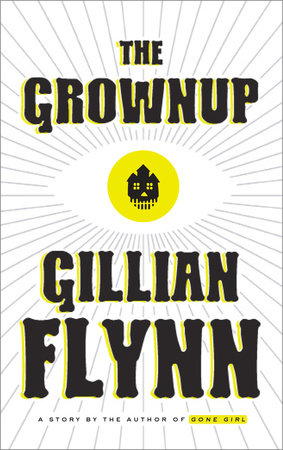 The Grownup by Gillian Flynn

When our narrator is hired by Susan Burke to cleanse her new home of the evil that resides there, it seems like easy money to the down-on-her-luck miscreant. She can smudge the place with sage, clean the walls and floors and then spend the rest of the time exploring the massive library filled with volumes such as The Woman in White, Rebecca, and The Turn of the Screw.

Little goes as planned and our narrator resorts to scouring the internet for the true history of the house – which involves the mysterious death of an entire family – and finds that oddly, the previous residents had a son who looks eerily like Susan’s trouble-making stepson Miles. Is it possible that Carterhook Manor is actually haunted? And if so, how is our narrator going to help when she is nothing but a con artist?

Gillian Flynn keeps the narrative moving in one unbroken chapter. As with her novels, she proves a master at creating fully developed characters using only the briefest of details. There is the constant feeling that things are only going to get worse, but the explanation and resolution are pure Flynn.

While we wait for the next full novel from Gillian Flynn, The Grownup is a nice reading diversion. Crown has put together a lovely hardback edition of the story, perfect for gift-giving this holiday season.