A Banquet of Consequences – The BOLO Books Review

Elizabeth George has been releasing books in the Thomas Lynley mystery series since 1988’s A Great Deliverance. The newest book in the series, A Banquet of Consequences, is the nineteenth. Fans who have felt that the last few novels have not been as strong as the early entries will be thrilled to know that this new book returns Elizabeth George to her glory days and promises new heights for the series moving forward.

Like most of the Lynley novels, A Banquet of Consequences requires a commitment from the reader. Coming in at just under 600 pages, this is not a book that can be consumed during a casual evening by the fireplace. Since she has the necessary page budget to do so, Elizabeth George skillfully navigates a convoluted plot featuring a plethora of unique characters.

A Banquet of Consequences begins with a lengthy flashback section in which readers are introduced to the characters who figure prominently into the novel’s mystery. At the center of this is Caroline Goldacre, the matriarch of a very screwed up family. Caroline’s connection to a controversial feminist novelist named Clare Abbott is the fuel on the fire leading to devastation for all. 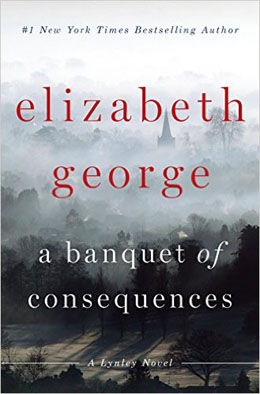 A Banquet of Consequences
by Elizabeth George

Meanwhile, Thomas Lynley is worried about his colleague Barbara Havers. Because Barbara is on probation with the police force, she is trying to stay on her best behavior, keep organized, and present herself in the most professional manner possible. For Lynley, this means that Havers is losing the essence of herself and he fears that her work will suffer as a result.

When Barbara asks to be assigned to the Clare Abbott case, Lynley encourages his superiors to give her a chance. Working with Winston Nkata, another favorite character from the series, the secrets of the Goldarce family are slowly uncovered. Elizabeth George is strongest when she focuses on the psychological makeup of her varied characters. The novel’s length allows readers to become fully invested in each and makes the resolution all the more impactful.

If there is a drawback to A Banquet of Consequences, it is the lack of development in the Thomas Lynley character. Lynley only makes brief appearances in the book and even then, it is mainly to advise on the Havers situation or to continue his flirtation with his new lady-love. Seeing Lynley return as the featured detective will go a long way to elevating this series once again. That said, A Banquet of Consequences is really Barbara Havers’ novel and it was necessary to move her character forward to avoid stagnation.

Readers who enjoy these long, complex novels of investigation will find much to keep them turning the pages in A Banquet of Consequences. The central case is just peculiar enough without straying into unbelievably. Elizabeth George’s writing really shines and while the length is daunting, it never feels padded or aimless. New readers could certainly enjoy the novel, but A Banquet of Consequences really rewards fans of the series and of Barbara Havers, in particular.