American Psycho began life as a controversial novel by Bret Easton Ellis before becoming an equally shocking movie. Now, there is a stage production, wherein the story of the stunningly handsome psychopath Patrick Bateman is set to music written by Duncan Sheik. Yes, American Psycho is now a Broadway musical. 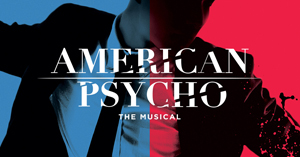 I saw a very early preview performance of the show on Saturday, April 2, 2016. The show did play London last year, so I don’t feel that I am overstepping too much by posting my thoughts at this time – even though professional critics must wait for the official opening night. Even so, this is not so much a review, as a collection of thoughts after seeing the production for the first time.

– The audience must always remember that this is intended to be satire. What we see on the stage is a heightened reality intended to skewer 80’s culture and the archetypal individuals who inhabited it. The book and movie have been labeled misogynistic and homophobic, but to my mind, the musical gets the balance correct. There is no doubt that Patrick Bateman is an angry, hateful man but to place any single label on him misses the point. Patrick only loves himself and everyone else is collateral damage left behind on his rise to the top.

– Early in the show, the guys and gals of the ensemble each get a shining moment – two songs that show how they interact with the world. The male characters get “Cards,” a hilarious moment, which is basically a love song to their business cards. The stylized dancing along with lyrics such as the following make it difficult not to love this song.

“Magnificent.
Impressive.
So thick, yet so light.
The lettering: Romalian.
The stock: it’s eggshell white.”

Meanwhile, the women sing “You Are What You Wear”

Should I rock the Betsey Johnson
Or stick with classic Comme des Garçon?…

But let’s be clear,
There’s nothing ironic
About our love of Manolo Blahnik.”

Some might view this song as a fluff piece intended to show that women are airheads and only care about clothes, but I would argue against that. These ladies – albeit occasionally superficial – are singing a song much like “Cards.” This shouldn’t be seen as a universal message about all women, but instead is very much the mindset of these particular 80’s ladies. They do measure their worth by who they are wearing and what they are eating. (Sidebar: The costumes throughout the show are excellent.) 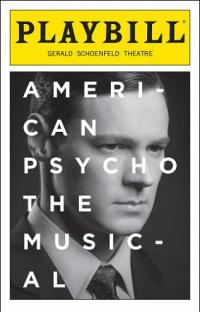 – There is a whole extended sequence in which Patrick and his girlfriend run into Patrick’s secretary at a performance of Les Miserables. Of course, Les Miz is one of the most iconic musicals of the 80’s (thereby reminding the audience of a time when scoring a ticket to that show was akin to getting into Hamilton nowadays). The ironic thing is that Les Miz is once again playing in the theater across the street from American Psycho (which might make some, like myself, extrapolate about the content of American Psycho and realize that the more things change, the more they stay the same).

But this moment also gives the writing team a trio song they can play for emotional resonance and mental diminishment. We get a nice harmony on:

– Here I will note that occasionally throughout the evening, the writers have interpolated classic songs from the 1980’s into the score. For me, these moments don’t work and took me out of the musical storyline. When songs like “In the Air Tonight,” “Everybody Wants to Rule the World,” and “Don’t You Want Me” start, I found myself thinking: “Hey, I know this song” rather than going with the flow of the plot line at that moment. The one exception is “Hip to be Square.” It’s an iconic moment in the film and since here in the musical it is playing from a radio (not sung by the actors), it feels very organic and does not undercut – no pun intended – the very violent moment it underscores.

And that moment, the end of Act I, is perfectly staged. I won’t say more here because it should be experienced in the theater. Overall the staging of the whole show is strong. The set is minimal but effective, the video projections are near perfect, and the sound design is spot on. Many of the audience scares come from the juxtaposition of silence and cacophony. Let it be known that this show is loud. Rumors are that the cast and crew of the theater next door – showing Tuck Everlasting – have made complaints about the sound decibels coming from the Gerald Schoenfeld Theater.

– Which brings me to Act II, wherein the problems lie. This act needs major work. The pacing is off, there are too many long quiet moments – both songs and scenes – and as a result, the evening begins to drag . If this can be tightened, there just might be a hit musical in here. But as it stands right now, American Psycho will not play to the masses (ie. tourists). To my mind, they did remove much of the ambiguity from the ending – a criticism faced by both the book and the film – but getting there can at times be tedious in that second act. That said, the final song – “ This is Not an Exit” – is one of the strongest internal monologue songs I have seen on stage. Patrick Bateman really lays it all out for the audience (and himself) and it’s impossible not to come away feeling that we as a society are partly responsible for creating mentalities that could go psycho.

– One final note about the cast: They are excellent. Benjamin Walker is giving a career-defining performance, which I fully expect to result in a Tony nomination. Jennifer Damiano and Helene Yorke really make an impression in their roles as the main women in Patrick’s life. Really, the only disappointment was Alice Ripley and this was the role’s fault not hers. Since we know how amazing a singer Alice is, it was sad that she did not get strong vocal spotlight moment in this show.

Kudos for the cast for embracing the lack of clothing thrown at them – Most of these folks are down to their underwear for much of the show, but when you look as good as they do, who can blame the director for going there.

All in all, this was an enjoyable evening of theater. Perfect for fans of rock musicals, crime fiction tales, and cutting-edge staging. Others will need to enter with an open mind. I, for one, am waiting to see how this one plays to the professional critics and general theater-going public. If the creators can tweak this just enough, there is a strong possibility this show will be around for a while. 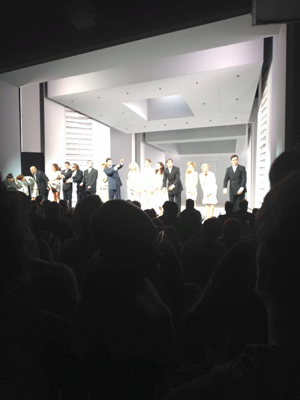