Sophie Hannah is known in the crime fiction community for writing some of the most complex and psychologically sound mysteries available, so it was not a surprise when the Agatha Christie estate announced that they had chosen her to write a new Hercule Poirot novel. Following the success of that first novel, The Monogram Murders, it was only a matter of time before Hannah returned to Poirot. That time is now. Closed Casket adds to the journey for Hercule Poirot, but once again, it is Scotland Yard detective Edward Catchpool who provides readers with an entrée to the scene of the crime.

In Closed Casket, celebrated children’s novelist Lady Athelinda Playford has invited her family and business associates to a party at her mansion in County Cork, Ireland. Surprisingly – to them, not to the reader – both Poirot and Catchpool are also on the guest list. Lady Playford starts the dinner by announcing that she is changing her Last Will and Testament to exclude her two children and leave her fortune to Joseph Scotcher, an unrelated man with a terminal illness and only months to live (at most). 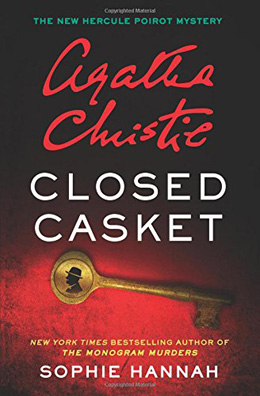 The complex nature of the crime and motive that follows is pure Sophie Hannah, while also ringing completely true as something that Dame Christie herself might have conceived of. As was Agatha Christie’s trademark, readers are faced with a limited pool of suspects with a multitude of motives and a decided lack of alibis. The investigation of the case plays out over the next few days and even ends with the expected gathering of suspects for the final reveal.

The convoluted case before Poirot and Catchpool will test them like few others have. Sophie Hannah clearly enjoys the word-play and surprises she is able to build into the plot. As always Poirot maintains his assertion that humans always make sense; there is always a logical reason for every action, even murder. Hannah has said that the idea for this novel began with the motive and it is indeed unusual and simple enough to warrant the inspiration.

Design-wise, Closed Casket harkens back to the days of older traditional mysteries. There is a map of the mansion included in the front matter and each of the chapters is given a title alluding to the action contained within. These elements help to lull readers into the sense that they could be reading some long-lost work by the master herself, but there is enough feeling of modernity to keep contemporary readers enthralled as well.

It is unclear how many of these Agatha Christie-inspired works Sophie Hannah will write, but if she is able to keep the quality at the level of these first two, she might find herself visiting with Hercule Poirot and Edward Catchpool for some time yet.