Domestic suspense continues to be an increasingly popular sub-genre of crime fiction, rife with variations on the theme of danger lurking in the most unexpected, yet commonplace, locations. The Vanishing Year by Kate Moretti is one of the most recent examples and one that will easily satisfy those readers addicted to these types of stories.

“No one stays the same person forever…Truly, how many people can one person be?” (The Vanishing Year, pg. 199)

The Vanishing Year is the story of Zoe, a woman on the run from her past, yet facing a nightmare in her present. Years ago, Zoe was involved in a high profile investigation – one that resulted in risk to her very life – so she makes the decision to start over again as a new person. As an orphan, this is the not the first time Zoe has had identity issues, so making this choice – while hardly easy – seemed like the best option at the time. 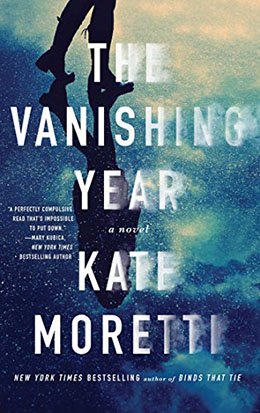 The Vanishing Year by Kate Moretti

And now, one year into her marriage to the dashing and successful Henry Whittaker, few could argue against that decision. Chairing high-profile social events and mingling among Manhattan’s social elite are idyllic and productive ways to pass the time. That is until Zoe is unexpected recognized at one of her charity events – starting the unraveling of her near-perfect life.

As Zoe attempts to deflect the unwanted attention of her former college roommate, someone else has realized who – and more importantly, where – Zoe is. Both physical and emotional treats follow and Zoe quickly realizes that in order to survive she is going to have to admit to everyone that sometimes the sins of the past do rise to haunt you.

Kate Moretti secures the readers loyalty by making Zoe a character they can champion. Zoe is caught up in actions that are beyond her control and as each new layer is revealed, it is impossible not to become addicted to the story and empathize with Zoe’s situtation. Midway through the novel, several chapters end with twists that alter both the past, and by extension, the present.

The theme of identity runs through The Vanishing Year. We all wear masks so that we can be the person we want to be, as well as the person others want us to be. But what happens when you start off not knowing who you are? And if everyone around us is having these same issues, how do we know whom we can trust?

The Vanishing Year successfully tackles these questions and entertains along the way. One caveat, however: the final fifty pages of The Vanishing Year contain a tonal shift that is not completely successful – straying a bit more than necessary into the graphic end of things – so readers sensitive to such matters should be aware. The resolution remains as satisfying as hoped for, but might have been better served by better matching the overall style and tone of the vast majority of the novel up to that point.