Friends do favors for each other all the time; so when Emily asks Stephanie to pick up her son after school, she thinks nothing of it. After all, she has to pick up her own son and the two boys love to have playtime, so no big deal, right? Except that Emily never comes to pick up her child later that evening and Stephanie realizes that something is very wrong. This is the set-up for Darcey Bell’s debut novel, A Simple Favor.

Like many books in the domestic suspense arena, A Simple Favor contains more than its share of secrets, revelations, and unexpected twists. However, Darcey Bell’s real strength is in her characterization. With Stephanie and Emily she has crafted two very complex female characters with such a keen eye for “voice” that readers can tell which character is speaking with only just a few written words. 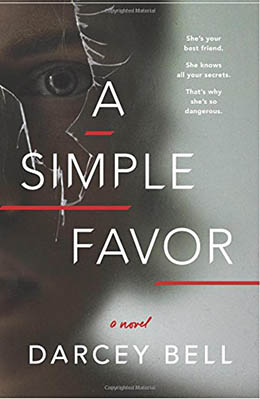 A Simple Favor by Darcey Bell

Darcey Bell’s skill at nailing “voice” even extends to the same character in different situations. Stephanie is an extremely popular “mommy blogger” and when those blog posts are highlighted within the story, readers can actually visualize Stephanie sitting down to craft those carefully worded posts of encouragement to her followers. Even though Stephanie’s tone is earnest and realistic, readers know that Darcey Bell is creating a satirical view of her ever-perfect advice column. This is in stark contrast to the “real-world” Stephanie readers meet and sympathize with over the course of the book.

And then there is Emily, whose enigmatic ways persist throughout the novel – regardless of whether the reader is seeing her through Stephanie’s eyes or through her own. Do readers ever really get to know the “real” Emily? Perhaps the most harmful secrets are not those that people tell, but rather those that remain unsaid.

A Simple Favor exposes the intricacies of female friendships. In a time when we see women championing each other, Darcey Bell reminds us that sometimes others do not always have our best interests at heart. Several moments in the novel strain credibility, but readers become so invested in these two characters that it is impossible not to want to see how this tale will end.

Darcey Bell’s debut is not flawless, but in never not entertaining. Based on the strength of her ability to manipulate point-of-view in skillful and effective ways, readers will certainly be eager to see down which dark path her next book leads. Be sure to watch your step!