TH1RTEEN R3ASONS WHY – Some Brief Thoughts

It seemed as though everyone was watching 13 Reasons Why over the last week or so.  As a result, I decided to delay my posting for a bit. While the below is mostly spoiler-free – the policy here at BOLO Books – I wanted folks to watch as free of expectations as possible.

But at this point, articles are all over the web, so I felt it was time to immortalize a few of my thoughts about 13 Reasons Why to the blog forever.

First, it is worth pointing out that I have been a huge fan of Jay Asher’s novel since it was originally released ten years ago. At that time, and still today, I believed it to be an important book in the Young Adult canon. This is largely because it deals with so many difficult topics in a way that allows young readers to analyze their own thoughts on each concept. 13 Reasons Why doesn’t sugarcoat high school life and never claims to have answers – only questions to ponder. 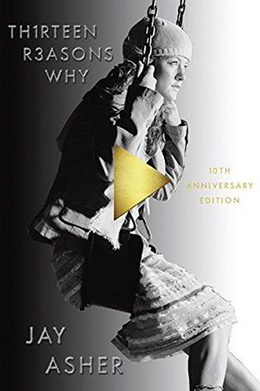 Which brings us to the Netflix Original produced by among others, Selena Gomez. I am happy to report that it more than lives up to the original novel – a rare occurrence in visual adaptation. It is clear that all those involved believed in this novel and the stories it had to tell.

I could go on and on about the cast, but I will limit myself by saying that when we watch 13 Reasons Why we are watching the birth of our next generation of great actors. Most of the young folks in the show have only had smaller roles in less high-profile productions, but Dylan Minnette (Clay), Christian Navarro (Tony), Alicia Boe (Jessica), Miles Heizer (Alex), and Ajiona Alexus (Sherri) are just a sampling of names we will be hearing much more of in the future.

And don’t even get me started on Katherine Langford, the actress playing Hannah Baker. Where did she come from? She is perfection – able to express a wide range of emotions (and their constant shift) in just an expression. The fact that she is currently filming another lead role in another of my favorite YA novel – Simon vs. The Homo Sapiens Agenda thrills me to no end.

Don’t be put off if you think 13 Reasons Why is aimed at a younger audience. Of course, it is! However, that doesn’t mean that adults won’t enjoy it. And more importantly it doesn’t mean that adults don’t need to hear the same message. Ultimately, the lesson of 13 Reasons Why is simple: Always be aware that what you do affects those around you, so choose wisely in all actions, words, and deeds. 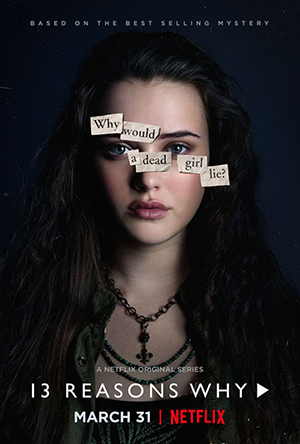 At its core, 13 Reasons Why is structured as a mystery. Viewers (and readers) are led along a path as each new audio tape reveals another step on Hannah’s descent and to her eventual suicide. I will caution that that television version much more graphically depicts the actual act of suicide and this is very difficult to watch. Whether it was necessary or not is not my call to make – the team behind the show had a vision and this was part of it. There are warnings before that episode, as well as before another episode which contains scenes which could be a potential trigger.

Here is where I say – If you are a parent, your kids *are* watching this show, so you should be watching it as well. It does worry me that being on Netflix will make this show accessible to younger people than it is intended for, but I am also against censorship of any kind, so I have to hope parents are monitoring their children’s viewing. That is my public service announcement for the day.

In terms of filming the show, I have never seen a better example of how to handle transitions between time periods in television or movie. The shift from one to the next is so smooth and effective each time. On occasion, you just want to pause the show and say “Wow” before rewinding and watching the transition again. The genius decision to have present-day Clay always sporting a forehead wound (or bandage) helps to keep the time shifts straight for viewers.

Again,as I do with my book reviews, I am going to remain spoiler-free here. But I will say that there are some changes to the ending that are clearly designed to set up a Season Two of 13 Reasons Why. Here are just a few things to consider as you watch the ending:

13 Reasons Why is an important step forward in television created for (and by) young Hollywood. This is no fluff piece. We as a society affect change through the art we consume and I think that shows like this will continue to engage people, get them thinking, and ultimately make a difference.