The cozy mystery sub-genre is populated with a plethora of amateur sleuths working a multitude of day-jobs as they solve crimes on the side; but rarely have I encountered such an inspired occupation as that found in Jill Orr’s debut mystery, The Good Byline.

Riley Ellison is an obituary writer – well, more accurately, her grandfather was a celebrated obituarist and when her childhood friend dies unexpectedly, Riley is asked if she would kindly write Jordan James’ obituary for the local newspaper. That’s all well and good, except that Riley long ago lost touch with Jordan and really knows very little about her current life. Wanting to pay tribute to her friend, however, she agrees to the assignment.

And therein lies Riley’s way into detective work. The more she does research on Jordan’s life, the less convinced she is that this was a woman prone to suicide (the official cause of death). As a journalist, Jordan James seems to have recently stumbled upon a major story – one she actively worked to avoid telling her boss about – and it just might be possible that this lead led to her demise. 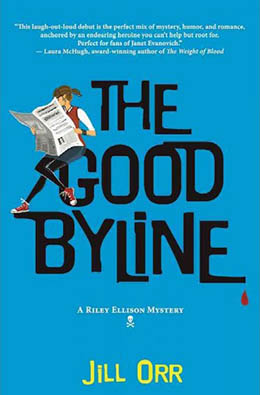 The Good Byline by Jill Orr

While all of that might seem a touch serious, in the hands of Jill Orr, it is a comic goldmine. Set in Tuttle Corner, Virginia, The Good Byline is filled with eccentric townsfolk who know – or at least, like to pretend they know – secrets about everyone else around town. Each odd duck Riley interviews is quirkier than the next. As though that were not enough, during this research Riley is also attempting to reignite her love life. Online dating – in Riley’s case via Click.com – has never inspired more smiles and giggles. When Jill Orr separates some chapters with commentary from “Regina H, Personal Romance Concierge,” I defy any reader not to laugh at the ridiculousness of it all.

Laughter may be the stock-in-trade here, but The Good Byline is also full of heart. Riley truly wants to respect her friend’s passing and she has high regard for the craft of obit writing. Interspersed throughout the text, Jill Orr has included enlightening quotes from real-world practitioners of obituary writing that demonstrate how this practice is more of an art than may be evident on the surface. Readers will never look at the obit column the same way again.

Riley Ellison is sure to become a fan favorite very quickly. At least two more books in the series are scheduled, but this career of Riley’s could certainly have her solving crimes for years to come. For now, Jill Orr has put pure joy on the page with The Good Byline. So if you need a bit of distraction from the real world, this might just be the antidote you are looking for.

Link to order the book: The Good Byline by Jill Orr

(N.B. the audio version of the novel, read by Sarah Naughton, is excellent and is available now – before the print edition available next week.)

Disclaimer: A print ARC of this title was provided to BOLO Books by the author. This review is also based on the audio version of the novel. No review was promised and the above is an unbiased review of the novel.