City of Saviors is the fourth book in Rachel Howzell Hall’s critically-acclaimed Elouise “Lou” Norton series. Readers who have followed Lou from her debut in Land of Shadows to Skies of Ash and then through Trail of Echoes will need no further impetus to crack the cover to check on her well-being; but for new readers, City of Saviors can work as a transition novel linking the actions of the earlier books to what will surely be a new phase in Lou Norton’s life hinted at in the conclusion of this new novel.

As City of Saviors opens, Lou Norton is back to work after a short leave of absence related to her situation at the end of Trail of Echoes. Most of her superiors, and even her own team, feel that she could stand a bit more time off to heal completely, but Lou is not one to ever take the easy road. She knows that if she takes her pain medication, it will be evident in her blood tests, so she stops cold and hopes to work through the pain. The nightmares that awaken her each night, however, are not making it easy for her to move on.

So, when Lou and her Caucasian partner, Colin Taggert, are called out to consult on the death of a 73-year-old hoarder, Lou is happy for the assignment. Upon arriving, calling this man’s passing a natural death or perhaps a tragic accident doesn’t sit well with Lou. Something tells her that there is more going on. Her investigation will lead her team to a questionable girlfriend, some sketchy old friends, a too-perfect church group, and a secretive Masonic fraternity. 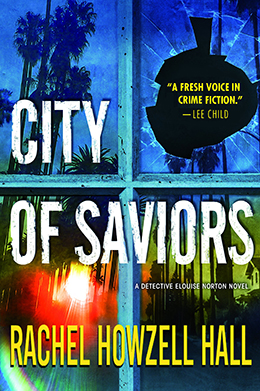 The opening tableau of City of Saviors is enough to send anyone straight to the shower. Rachel Howzell Hall’s language is so descriptive and the situation so horrifying, but still readers are instantly drawn into the story of this reclusive man and his strange death. Later revelations – best left to be experienced in situ – will almost certainly haunt reader’s minds for some time to come.

Fans of the series know that Lou Norton is one of the most interesting and complex characters in the crime fiction canon. City of Saviors digs even deeper into her psyche. As written by Rachel Howzell Hall, Lou is a woman who is as comfortable referencing Infinite Jest as she is quoting Wu-Tang Clan. Her authoritative references are always authentic and spot-on in their specificity. Phrases like “fellatio in a Ferrari on the 405” roll off her tongue so easily, they are like rap lyrics worthy of their own beatbox score for punctuation. Clearly she embraces being a woman and is not one to shy away from her sensuality.

In fact, it is Lou’s banter with members of her extended circle that infuses this novel with wit and humor. Whether she is verbally sparring with her partner Colin or laughing at the expense of her best friend, Lou does it all with goodness in her heart. This makes here so relatable and readers will want to be Lou Norton’s friend for life.

There is so much happening in City of Saviors – Lou’s current case, her troubles with post-traumatic stress, innumerable struggles in her dating life, various friends in need, issues on the work front, and interfering family drama – yet, because of Rachel Howzell Hall’s confident command of the written word, the plot never feels overloaded. Each of those situations can be distilled down to the idea of saviors: how we look for what we need, even when we don’t know we need it.

In some ways, City of Saviors is a culmination of events leading up to this moment in Lou’s life, but with Rachel Howzell Hall’s skill at drawing new readers in, it also works perfectly fine as an entry point into the series. Because of the necessity to explain some of the revelations made in earlier books, those starting with City of Saviors may not feel the same suspense should they choose to go back to read those earlier books, however, there is no doubt that will still connect with Lou Norton on a visceral level.

Reviews of other books in the series: Land of Shadows, Skies of Ash, and Trail of Echoes