A reverse bildungsroman may seem like a bit of an oxymoron, but that is exactly what e. lockhart gifts to readers with her new young adult novel, Genuine Fraud. By manipulating this predominately Victorian art form, lockhart tells a fascinating tale peppered with subtle, but powerful, commentary on gender politics and enough nefarious elements to delight fans of crime fiction.

Told in reverse chronological order, Genuine Fraud’s chapters countdown from eighteen to one – each with a clear calendar designation and location marker to help orient readers. The chapters themselves proceed in typical forward movement, so in the end Genuine Fraud has a bit of a chain-link effect with the story doubling back on itself before moving forward again until ultimately, a brief coda brings the whole novel to an end. Trust me, this sounds much more complicated than it feels when reading it. 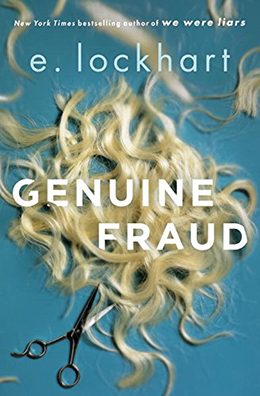 At its core, Genuine Fraud is the story of how Jule West Williams became the person she is – particularly in how it relates to the parallel life of Imogen Sokoloff. As readers journey with Jule through the various stages of her development, the legitimacy of her methods begins to resonate. To say much about the criminal elements within the story would be too much of a spoiler here, but certainly the title alone hints at possible plot paths and the reader is justly rewarded.

If one pretends to be something for long enough, at what point does that act become the reality? This is the theme that will resonate longest with the reader at the conclusion of this relatively short novel. We Were Liars still remains my favorite of e. lockhart’s novels, but it is possible to see the emergence of recurring ideas within her output: identity and feminism, at the forefront, which will have readers salivating for her next book.

There is nothing simple about Genuine Fraud. The structure is complex, the motivations are complicated, and the payoff for both teen and adult readers is multifaceted. There is much to appreciate here; fans of crime fiction authors like Megan Abbott, Jessica Knoll, and Gillian Flynn will find themselves in comfortable territory.