Booke of the Hidden – The BOLO Books Review

With the debut of Booke of the Hidden, Jeri Westerson launches a new series with a new publisher. A blend of urban fantasy and paranormal romance, Booke of the Hidden also features elements of the historical, mystery, and thriller genres.

Jeri Westerson wastes no time before jumping into the crux of the novel. Kylie Strange has relocated to Maine after a recent breakup. She decides to open a tea shop in the quaint town and while doing some renovations stumbles upon a unique – and blank – book sealed behind the building’s wall. Almost instantly, ominous things begin to occur, including the appearance of a dark and brooding man who demands answers to questions Kylie does not understand. 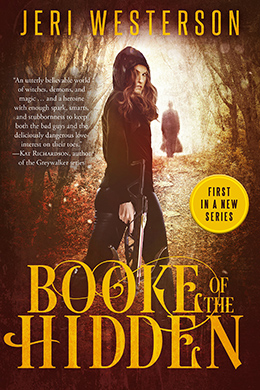 Readers quickly discover that the Booke of the Hidden, much like Pandora’s Box, once held an array of ancient and dangerous creatures. Once, being the operative word here, because when Kylie opened the book(e) she released them back into the world. Oops. Unwittingly, this also made her responsible for capturing them once again – thereby forming the backbone of the series.

Genre fans will expect a strong female lead character, and with Kylie Strange, Jeri Westerson delivers. Readers will respond to Kylie’s attitude, intellect, and inquisitive nature. And it practically goes without saying, but when she can’t outwit or outsmart her opponents, she is more than capable of kicking ass – crossbow in hand. The romance elements are slower to take hold – reader’s have to explore the chemistry between Kylie and the men in her life – but future books in the series are sure to allow a natural evolution on that front. Certainly by the end of Booke of the Hidden it is clear that at least one of those men – Erasmus Dark – has secrets of his own.

Strong world-building rooted in the lore of the location adds authenticity without overpowering the fun nature of the read. Fans of this genre will be thoroughly entertained and left with just enough new questions to increase anticipation of future volumes in Kylie Strange’s story.

Buy Links: Booke of the Hidden by Jeri Westerson