Insidious Intent is the tenth book in Val McDermid’s longest running series. Readers have followed the trials and tribulations of Tony Hill and Carol Jordan – both in print and on-screen – for years. At this stage of the game, they are an iconic duo and their creator is a legend in crime fiction.

Since Cross and Burn, the Tony Hill/Carol Jordan series has become more of an ensemble piece. In the previous novel, Splinter the Silence, Jordan was placed in charge of a new division – a regional Major Incident Team – and the colleagues she has assembled to work with all play crucial roles in the plot of Insidious Intent.

The reMIT unit’s first real case is a complex one. Women are going missing after attending wedding ceremonies and Jordan, et al. can’t seem to find any other link between the victims. Well, other than the fact that the bodies are disposed of by being set aflame within their own cars on deserted roads outside of town. 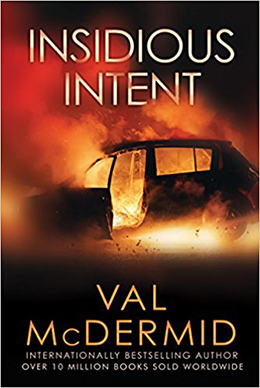 Meanwhile, Tony Hill is increasingly worried about Carol and the guilt she feels over a court ruling made in the previous novel. Some of this also ties into the storyline for Stacey Chen (the unit’s computer expert) and Sam Evans (the only series regular who is not part of this newly-formed team.) McDermid does a good job of bringing readers up to date on the situation, so even new fans will not feel lost as the long-lasting impact of that decision plays out on the page.

Elsewhere, Paula and Elinor are dealing with the new addition of a foster son to their home. Torin has gotten himself mixed up with some social media madness and it will take the whole family – both the personal and the professional families – to keep him safe.

There is an ease to Val McDermid’s writing that underlies the complexity of her novels. Readers will find themselves swept up in the action of the plot without realizing the larger impact these developments could have. How the investigation progresses feels authentic and it will be no surprise to fans that the arson forensics detailed within are fascinating and one assumes, accurate, since few authors understand forensics better than Val McDermid.

As always, the unique relationship between Tony Hill and Carol Jordan keeps readers hooked. Few crime fiction duos have suffered as extensively as these two – on all fronts – so maintaining and rewarding that investment is highly important to their creator.

In an unusual move, Val McDermid includes a plea about avoiding spoilers about the conclusion of Insidious Intent and I fully intend to abide by her wishes – I always avoid spoilers anyway – but word on the street is that it will be a while before the next book in this series, so readers will just have to wait until then to see how the explosive final tableau of Insidious Intent affects the series moving forward.