The Dry – The BOLO Books Review

The oppressive heat across the Kiewarra landscape permeates every moment of Jane Harper’s debut, The Dry. Crime fiction out of Australia continues to gain popularity and this talented author is most certainly at the forefront of the attention.

The Dry is a perfectly-structured tale examining how past actions can haunt the future. As the novel begins, Aaron Falk returns to his small hometown for the funeral of his childhood friend, Luke Hadler. Just days previously, Luke had slaughtered his wife and child before taking his own life. The only surviving member of the Handler homestead is baby Charlotte. As a Federal Police Investigator – now working in the financial crimes division – Falk could never condone his old friend’s actions, but he also can’t wrap his mind around why Luke would do such a thing. 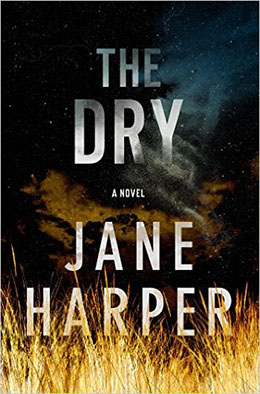 Although Falk wants nothing more than get out of town again as quickly as possible, Luke’s father asks him to look into the case before running off again. Turns out that many in Kiewarra still blame Falk for the death of a young girl years earlier – a death that forever bonded Falk and Luke. It is that invisible link which convinces Falk to do some preliminary digging on the current case and it is not very long before he is convinced that no one really understands what happened that night at the Hadler farm.

Jane Harper masterfully navigates the blend of past and present throughout The Dry. The current investigation proceeds in logical progression, but as revelations remind Falk of the past, those moments come alive in a way that makes them feel just as urgent as solving the Hadler massacre. And no less cryptic. Readers find themselves in a hallucinatory realm in which the flow between present and past – and back again – feels as natural as breathing.

The farming community of Kiewarra is populated with wonderful characters uniquely crafted to keep the story’s momentum moving forward organically. Aaron Falk will be the lynchpin of the series, but certainly many of these other characters have vital life left within and one hopes to visit with a few of them again in the future.

Through it all, it is Jane Harper’s prose that really astounds. She is a master at painting word pictures. Many of her readers will have never visited Australia – myself included – but by the end of The Dry, they will fully expect to find postcards and pictures in their family scrapbooks documenting their times out on the dry Kiewarra land. That is how real this journey Down Under feels.

The Dry has already racked up a number of award wins and massive love from the critics. It is easy to imagine that this will continue into the new year. This was probably the most difficult cut from my Top Reads of 2017 list – it is worthy of all the attention it is getting. The paperback version of The Dry will be out very shortly, followed early next year by the second book in the Aaron Falk series – Force of Nature. Fans are already justifiably eager to get their hands on that one.