King has Derry, Maine and Dickens had London, England. And now C. J. Tudor takes readers to the tiny English village of Anderbury in a style that echoes both of these legends. Similar to how Dickens opens A Tale of Two Cities with that now famous “It was the best of times, it was the worst of times” passage, C. J. Tudor lures readers into The Chalk Man with a brief section that is both poetic and prophetic. This chapter – hardly more than a few paragraphs – follows a short prologue and finds our narrator debating just when the crucial events, which form the crux of the novel, actually began. After all, beginnings are so very important. Not only does this immediately capture the reader’s imagination, it also provides a nice entré into the book’s structure – that of alternating time lines traveling back and forth between 2016 and 1986. 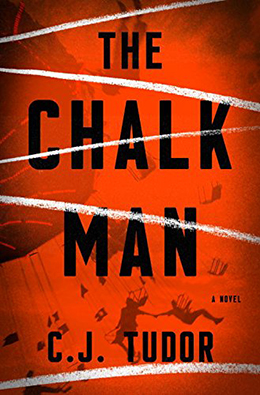 The Chalk Man is a coming-of-age story that uses a horrific crime within this quiet village as a catalyst for the maturation of a group of kids. Eddie “Munster” Adams is the first person narrator of the tale. Growing up in the mid-eighties, he and his cohorts – Fat Gav, Metal Mickey, Hoppo, and (the only girl member of their mini-tribe,) Nicky are living care-free lives until a trip to the local carnival alters their trajectory forever. A tragic accident connects Eddie’s fate with that of new albino teacher, Mr. Halloran, and no one will be same afterwards.

Told as a memory piece, the older Eddie (of 2016) is now a teacher himself and his complacent life is shattered when he receives a letter containing a chalk stick figure – the same symbol he and his pals used to communicate during that fateful summer of 1986. Unable to reconcile past events, Eddie launches an investigation to uncover the truth about that summer’s murder and the intimate role he played in its outcome.

C. J. Tudor certainly knows how to tell a gripping story. Once begun, it becomes virtually impossible to put The Chalk Man down until all is revealed. She weaves a spell of nostalgia that will resonate with all readers, but especially those who remember – and perhaps continue to long for – the eighties. The blending of crime and adolescence is palpable and profound – not unlike the feeling reader’s experienced when first exposed to Stephen King’s novella, The Body (and/on Stand By Me, the film it was adapted into.)

Much will be made of the cleverly constructed plot of The Chalk Man and the sharply defined characterization of those involved – and both of those are most certainly worthy of note – but the importance of maintaining the tone and ambiance necessary to carry off this novel can not be overlooked. C. J. Tudor’s writing infects the reader’s psyche, lulling the reader into a state of wonder, only to betray that faith at critical moments (in only the best sense of that word.)

The Chalk Man is a debut to cling to. I suspect readers will one day look back fondly on this novel as the beginning of a very long author/fan relationship.