After proving that she can write both historical cozies (the Dandy Gilver series) and an assortment of stand-alone suspense novels of every ilk, Catriona McPherson is once again trying to prove that she can conquer anything she sets her mind to – at least as far as writing styles go. With Scot Free, Catriona McPherson launches a new humorous traditional mystery series and for those that have had any personal interactions with this talented author, it will certainly seem like the perfect fit given her exuberant personality and obvious Scottish-ness.

The heroine of Scot Free is Lexy Campbell, a Scotlander who finds herself unexpectedly transplanted in Cuento, California. Well, technically, she expected her marriage to golfer/dentist Branston Lancer to last longer than ice cream on the hood of a hot car, but that was not to be. You might think that Lexy’s career as a marriage guidance therapist would have worked in her favor, but that is simply crazy talk. 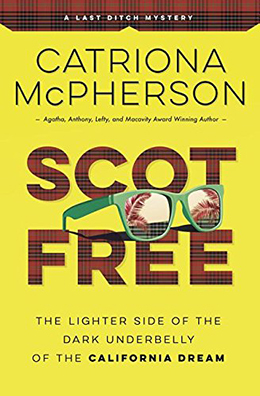 As Scot Free begins, Lexy is planning to head back to Scotland when her elderly client, Mrs. Bombaro, is arrested for murdering her fireworks magnate husband. Before she can think rationally, Lexy finds herself volunteering as a character witness for Mrs. Bombaro – which ultimately means she will be renting a room at the Last Ditch Motel until the trial is complete.

Like Holmes’ Baker Street Irregulars, Lexy’s cadre of motel misfits is there to lend her support and assistance, while also bringing along more than a few complications. In particular, Lexy’s “relationship” with Todd, her bug-phobic and ultra-gay neighbor rapidly morphs into a Nick and Nora type investigative team that had me in stitches.

Scot Free is truly a story of a stranger in a strange land. Catriona McPherson nails the various confusions foreigners have with American customs (and vice versa). There are laugh-out-loud moments in this book that will never be forgotten – such as Lexy’s first ride in a police car. McPherson crafts certain turns of phrase that near perfection in their ability to express everyday notions. The humor is droll and mordant without the risk of ever becoming offensive, mainly because so many of the interactions are stereotypically accurate, downright hilarious, and ultimately respectful of people’s differences.

For a long time, readers have been willing to follow Catriona McPherson anywhere and everywhere the written word takes her. Now they will joyfully follow Lexy Campbell as well. In our times of great stress, it is nice to have a comfort read that never takes itself too seriously, but also never lacks in quality and compassion. Scot Free fits the bill!