I had a great weekend at the first ever Noir @ the Bar in Gaithersburg, Maryland. It was such fun to hang with some of my favorite people, meet some new friends, and hear some excellent readings. Yes, I may have ended up buying some new books afterwards as well – one of which just might be listed below, even though it is not new this week.  It’s new to me!  There are also a few other books that might interest you coming out this week.  Funny how that keeps happening. 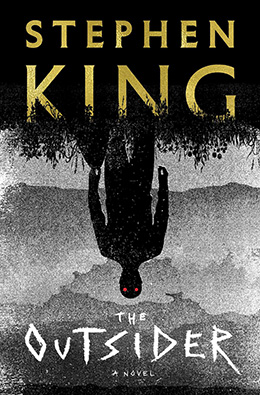 It’s Stephen King, so really nothing more needs to be said. This new epic novel is set within the world of the Mr. Mercedes series and seems like it will continue the “crime” meets “supernatural” aspects of those excellent books. Mr. King, if you are reading this and would like to participate in our 5-question Composite Sketch feature here at BOLO Books, we love to have you!

An unspeakable crime. A confounding investigation. At a time when the King brand has never been stronger, he has delivered one of his most unsettling and compulsively readable stories.

An eleven-year-old boy’s violated corpse is found in a town park. Eyewitnesses and fingerprints point unmistakably to one of Flint City’s most popular citizens. He is Terry Maitland, Little League coach, English teacher, husband, and father of two girls. Detective Ralph Anderson, whose son Maitland once coached, orders a quick and very public arrest. Maitland has an alibi, but Anderson and the district attorney soon add DNA evidence to go with the fingerprints and witnesses. Their case seems ironclad.

As the investigation expands and horrifying answers begin to emerge, King’s propulsive story kicks into high gear, generating strong tension and almost unbearable suspense. Terry Maitland seems like a nice guy, but is he wearing another face? When the answer comes, it will shock you as only Stephen King can. 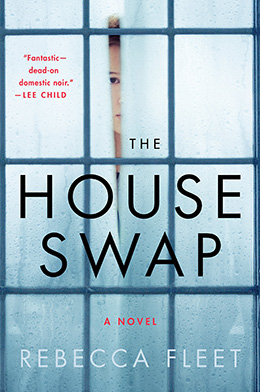 The idea of trading houses has been used in several crime novels over the years, but here it is given a new twist by linking it with a more straight-forward domestic suspense tale. Lock the doors and be prepared to check each closet, as this one will keep you reading late into the night – to the time when those normal house creaks start to take on a new ominous significance.

She may not know exactly who is in her house. But she knows why they are there…

A house swap becomes the eerie backdrop to a chilling look inside a broken marriage filled with tantalizing secrets.

When Caroline and Francis receive an offer to house swap–from their city apartment to a house in a leafy, upscale London suburb–they jump at the chance for a week away from home, their son, and the tensions that have pushed their marriage to the brink.

As the couple settles in, the old problems that permeate their marriage–his unhealthy behaviors, her indiscretions–start bubbling to the surface. But while they attempt to mend their relationship, their neighbor, an intense young woman, is showing a little too much interest in their activities.

Meanwhile, Caroline slowly begins to uncover some signs of life in the stark house–signs of her life. The flowers in the bathroom or the music might seem innocent to anyone else–but to her they are clues. It seems the person they have swapped with is someone who knows her, someone who knows the secrets she’s desperate to forget. . . . 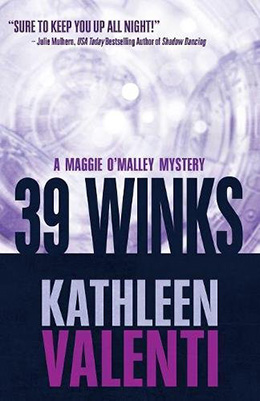 Kathleen Valenti’s debut, Protocol, competed for the Best First Novel Agatha Award, so anticipation for this follow-up is high. A pharmaceutical researcher is an interesting occupation for a protagonist and with a plot centered on sleepwalking, this one seems irresistible.

Former pharmaceutical researcher Maggie O’Malley is losing sleep. Constantine’s aunt is a multitasking sleepwalker who, in addition to wandering her stately home, prepares meals, folds laundry and, one winter night, stumbles across her husband with his throat slit.

It’s a rude and gruesome awakening that’s upsetting to Aunt Polly. And interesting to the police.

Maggie and Constantine work to uncover who killed the cosmetic surgery mogul and why. As they dig into the lives of those who knew him best, they discover that the truth is only skin deep and doctoring perception is a treatment with deadly side effects.

A gripping page-turner with more twists than a surgeon’s suture, 39 Winks is a tale of lies, betrayals and greed that will keep you up at night. And looking over your shoulder. 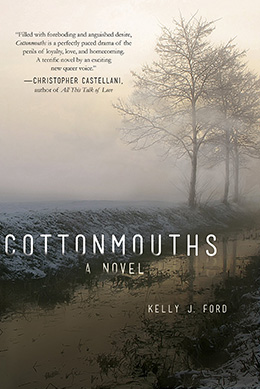 This is the book I alluded to above. It’s been out for about a year, but when I heard Kelly read from it at Noir @ the Bar, I just knew my followers would be drawn to her version of Southern Noir. The fact that the novel also matches my initiative to cover as much diversity in our crime fiction tribe as possible made it an easy choice to feature here. Not to mention, it’s currently only $1.99 for the e-book, so who can resist that!  A few of us even convinced Kelly to attend Bouchercon St. Pete’s in September, so you too can get a chance to meet her soon.

College was supposed to be an escape for Emily Skinner. But after failing out of school, she’s left with no choice but to return to her small Arkansas hometown, a place run on gossip and good Christian values.

She’s not alone. Emily’s former best friend—and childhood crush—Jody Monroe is back with a baby. Emily can’t resist the opportunity to reconnect, despite the uncomfortable way things ended between them and her mom’s disapproval of their friendship. When Emily stumbles upon a meth lab on Jody’s property, she realizes just how far they’ve both fallen.

Emily intends to keep her distance from Jody, but when she’s kicked out of her house with no money and nowhere to go, a paying job as Jody’s live-in babysitter is hard to pass up. As they grow closer, Emily glimpses a future for the first time since coming home. She dismisses her worries; after all, Jody is a single mom. The meth lab is a means to an end. And besides, for Emily, Jody is the real drug.

But when Jody’s business partner goes missing, and the lies begin to pile up, Emily will learn just how far Jody is willing to go to save her own skin—and how much Emily herself has risked for the love of someone who may never truly love her back.

Echoing the work of authors like Daniel Woodrell and Sarah Waters, Cottonmouths is an unflinching story about the ways in which the past pulls us back . . . despite our best efforts to leave it behind.