Find You in the Dark – The BOLO Books Review

Lately, writers are finding new ways to explore the phenomenon of the serial killer. Take for example, Nathan Ripley’s Find You in the Dark: On the surface, this is a domestic suspense tale, but the foundation of the plot is firmly rooted in the history of serial killer crimes – and more specifically, the undiscovered bodies of victims left in their wake.

In Find You in the Dark, Martin Reese is an average, everyday man going about his life with just one, not so small, caveat. Martin happens to have an unusual knack for discovering the long buried bodies of serial killer victims. You see, Martin illegally purchases police files and devotes excessive amounts of time to analyzing them – time the already over-worked police professionals do not have – and in doing so, he regularly manages to uncover the final resting places of the victims. 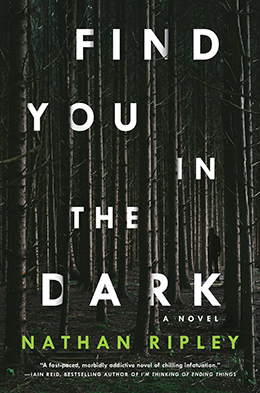 Now, since he can’t simple walk into the police station and tell them where to look, Martin goes out, digs to make sure he is correct, re-buries the bodies, and calls the police tip line to direct professionals to these “graves” (using a voice distorting device, naturally). Martin sees his goal as one of bringing solace to the families who has suffered with years of questions, but what he is doing is not going unnoticed. With Martin’s very high success rate, Detective Sandra Whittal has become suspicious of how this man she has dubbed “The Finder” is managing to clear cases the professionals were stumped by.

Martin comes by his interest in odd ways. His wife’s sister was suspected of being the victim of a serial killer and her body was never discovered. When Martin receives information that he believes reveals his sister-in-laws burial site, he feels a sense of relief being able to bring closure for his wife and daughter. That is, until he goes to check that he is correct, only to find a new, fresh corpse buried along with this older skeleton. And someone has called the police and reported this location using The Finder’s standard method; but it wasn’t Martin.

With this set-up, Nathan Ripley puts into place two distinct cat and mouse chases. First there is the conflict between Martin and whoever this new caller is – this man who has discovered Martin’s secret. But there is also Sandra’s hunt for The Finder – whom she now believes is the killer of this newly discovered body. Meanwhile, Martin’s daughter has noticed her Dad’s unusual night-time excursions and she too wants answers of her own.

Find You in the Dark hardly progresses the way readers will expect. Nathan Ripley is a pen name for Naben Ruthnum, a journalist and author known for more literary stylings. Here he brings these traits to the crime fiction genre in unexpected, but gripping ways. Readers will become invested in Martin Reese, even as they begin to suspect that a new kind of darkness looms within his soul.

There is something unsettling about this story and readers will feel that tension growing as they consume Find You in the Dark. Contrasting and conflicting emotions will dominate, making it impossible to stop until the chase is complete. Just remember that Nietzsche has warned us: “if you gaze long enough into an abyss, the abyss will gaze back into you.”

BUY LINKS: Find You in the Dark by Nathan Ripley