If you were to ask me who the three authors I would love to have as part of the Composite Sketch feature, but whom I would think would be the most elusive, those names would be Stephen King, Mary Higgins Clark, and this week’s guest. Yes, folks, I have dreamt of having Louise Penny as a guest on BOLO Books for many, many years. And today she is here – if you could see me, you would see the huge smile on my face and my fan-boy heart pounding out of my chest. I first met Louise at the Bouchercon in Baltimore (2008), where I became an instant fan of both the woman herself and her Three Pines novels. After that first meeting, I would see and chat with both Louise and her dear husband, Michael, at every Bouchercon and Malice Domestic we both attended. Conversations that were always heart-felt, honest, and funny. Louise phoned into my local book club twice to discuss her novels with our group. Every year, her star would continue to rise, but Louise never lost sight of the journey, always willing to talk with and support others in and around our tribe. I will forever cherish those moments talking with her biggest fan, Michael, when we found ourselves as seatmates at several of Louise’s panel appearances over the years – such a kind, gentle man (dare I say, Gamache embodied). I have long said that Louise’s books should be sub-titled “On How To Be a Better Person” because each of them is a roadmap to the heart and soul of humanity. Louise Penny is a gift to the crime fiction community, but more accurately, she is a gift to the world. I am honored to be able to call her Friend and I am thrilled that she is here today to answer our standard Composite Sketch Questionnaire. I predict that you will not be disappointed. 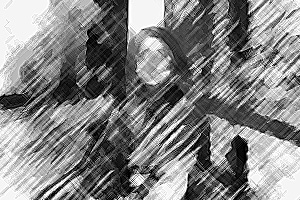 My husband Michael. He was and is the template for Chief Inspector Gamache. His strength, integrity, sense of humour. His willingness to be vulnerable. His kindness and his courage.

Rhys Bowen, who is not only a brilliant and creative writer, but a generous, kind and supportive friend, to me and to other writers.

Atticus Finch – though I doubt I’d be alone in the bushes, stalking. 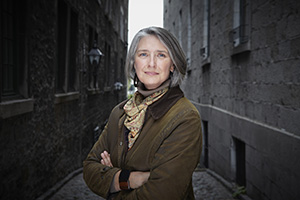 Photo Credit: Jean-François Bérubé
Find out more about Louise and her books here