On the surface, Louise Doughty’s Apple Tree Yard reads as a fairly standard story of a love affair gone wrong; but just under the surface, readers will find a complex examination of human nature and the emotions related to it.  The novel highlights how the choices we make can alter our destiny and that sometimes it is impossible to know where the dark alleys of the mind will lead.

As the novel begins, Yvonne Carmichael is living a charmed life.  She has a wonderful home life, a fulfilling and successful career, and the money to buy any worldly goods she would like.  But one day, while working at the Houses of Parliament, she encounters Mr. X and begins a passionate and risky affair with him.  Unable to explain where this magnetic attraction has come from, Yvonne and Mr. X find themselves increasingly drawn together, to the exclusion of their other obligations.

The first section of the novel focuses on their affair and the various clandestine meetings they arrange for their sexual escapades.  This first section is called “X and Y” and even though we see the story from Yvonne’s perspective, what is really presented is how men and women view sex differently and the interaction of those two viewpoints within a fervent relationship.  Mr. X loves the risks associated with public sex and Yvonne cares so much for Mr. X that she is willing to do anything to please him.

“A, T, C and G” is the sub-title of the second section of the novel.  These letters are commonly used to denote major nucleotides.  It should be pointed out that since Yvonne is a geneticist, these section sub-titles relate directly to her and reinforce the notion that this is Yvonne’s story.  In this section, we see a meandering plot that blossoms into a centrally focused point of action.  This act of violence, which I will not reveal here, alters Yvonne’s life in ways that she cannot begin to imagine.  Slowly, readers will begin to see the dropping of little clues that reveal that not all things are copacetic in Yvonne’s relationships.  At fifty-two years of age, it seems that Yvonne may be experiencing a mid-life crisis of sorts and the actions she takes as a result, are going to cause her much grief.  Readers know this, and yet it is impossible to look away. 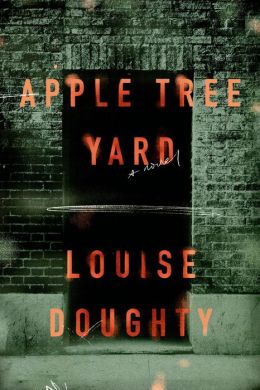 The final third of the book, a section sub-titled “DNA,” depicts the trial proceedings that are the result of the decisions made earlier in the story.  Readers will already know that this trial is coming, because the opening prologue of the novel involves Yvonne’s testimony before the court.  It is in this section where the true depth and complexity of the story is revealed to the reader. Experiencing this section will force readers to run the gamut of emotions and may have them second-guessing their thoughts on prior events within the book.  Without a doubt, by the end of the novel, readers will be emotionally spent, their shifting allegiance will likely never find solid ground, and they most definitely will think twice before beginning an affair.

Louise Doughty makes the wise decision to present the entire novel in the form of a letter (or story told) to Mr. X.  Extramarital affairs have become a cliché in our modern lives, but Apple Tree Yard goes that extra step to show just how destruction bad decisions can be and that as a result of these sexual shenanigans lives can, and will, be ruined.  After reading Apple Tree Yard, it will be impossible for readers to look at the street signs on city roads the same way again – because we now know what happens down those dark, secluded alleys – and we have Louise Doughty to thank for that.