This past weekend, I spent a most wonderful time in New York City.  The original purpose of the trip was to see the JJ Abrams and Doug Dorst event at Symphony Space, but as you will soon see, it became so much more than that.

In the weeks leading up to the trip, followers of BOLO Books no doubt read the various posts about the release of the book S. by Doug Dorst and JJ Abrams.  The two most important of these were a post offering a glimpse inside and the official BOLO Books review.  But what you may not have been aware of was that a contest was going on over at the Mulholland Books website relating to the release of S.  This contest contained a cipher puzzle and correctly answering this cipher would result in the winning of a truly fantastic prize – a lunch date with both JJ Abrams and Doug Dorst.  And folks, I won that prize!

I have been granted permission to post my answer to the cipher contest here on BOLO Books.   Please follow this link to the original puzzle as posted on Mulholland along with their explanation of the answer.  My answer, which was given in the form of an acrostic (in which the first letter of each line horizontally read BOLO BOOKS), is below:

Begin with the directions.
Obviously they provide cipher clues.
Luckily playfair was the encryption method and
Of course sailor Maelstrom was the keyword.

But digraphs came from the poem itself.
Oddly important, each lines first and last letters.
Omit “z”
Kindly read vertically to
See who wishes to dine. 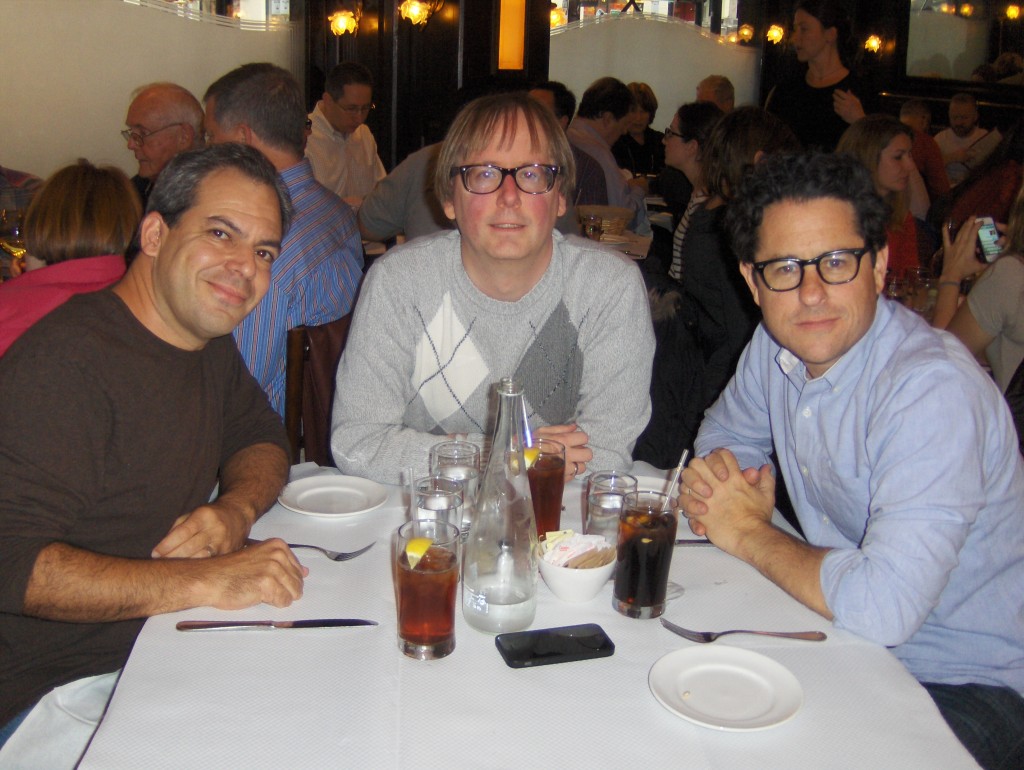 And now onward to the prize:  On Friday, November 22, I met both Doug Dorst and JJ Abrams at Balthazar restaurant for a very special lunch filled with wonderful food and incredible discussion.  While some of what occurred at the lunch, I will keep off the record at the request of those in attendance – I can share some select highlights.

The lunch last just under an hour because both Doug and JJ were off to do some radio promotion for S. before the Soho Apple store event that evening.  It was more than an honor to have this time to sit down with them.  Both gentlemen were very welcoming and it really felt like a casual lunch among friends.  That is completely to the credit of those two men, as for me, it will always remain a highpoint of my blog-related life.  Oh, who am I kidding, it will be a highlight of my entire life.

On Saturday night, I did also attended the Symphony Space event featuring JJ Abrams and Doug Dorst.  This conversation about S. was facilitated by Lena Dunham and she was hilarious.  Here are just a few brief highlights from that event:

All in all, the Symphony Space event was fun and informative.  I didn’t stick around for the signing portion, since I had already gotten my books signed.  But it is safe to say that in the end, it was a once-in-a-lifetime weekend in New York City and something that I will never forget.  Thank you to Mulholland Books, Doug Dorst and JJ Abrams!