The J.J. Abrams and Doug Dorst created novel S. has been covered here on BOLO Books in a variety of ways.  First we had a glimpse inside the book, followed by the full review of S.  And let’s not forget the account of my lunch with J.J. and Doug at Balthazar after winning the contest sponsored by Mulholland Books.  Today, I am happy to welcome Doug Dorst to BOLO Books for an interview about the creation of this unique book that is S.

BOLO Books:  S. is quite a feat of publishing.  A fully immersive read unlike anything else out there.  How long did you work on the actual writing of the book?

Doug Dorst:  Thanks, Kristopher. I’m glad you like the book.

I first spoke with JJ in early 2009. He and Lindsey Weber (head of features at Bad Robot) and I worked on developing the characters and themes for a while, and we put together a pitch document and a sample (the foreword and Ch. 1, if I recall correctly) that we took to publishers in April 2011. Work continued right up until the publication date in October.

BOLO Books:  Did you know much about ciphers before you began work on the book?  How difficult was it to get those footnotes to scan properly, while still meeting the needs of the chapter cipher?

Doug Dorst:  I didn’t know much about ciphers at all, and I never thought I’d write a book in which they played a role. The Straka story seemed to call for them, though, so I educated myself as best I could and got to work. It was tremendous fun, of course, and I think the code-narratives add a lot to the larger story.

It wasn’t too difficult to integrate the elements of the ciphers into the text. In fact, they sometimes served as generative devices – e.g., Well, I need this word/phrase/letter/number here… What would Caldeira (or another character) do to work it in?  — which led me to some details and plot elements that I probably wouldn’t have discovered otherwise.

BOLO Books:  Ship of Theseus as presented in S. is a translated work.  Clearly this ties into many of the larger themes of the novel, but I am wondering about your general thoughts on translated works.  Should readers always try to read the original, if possible?

Doug Dorst:  If you’re adept enough in another language to do so, sure, although a good translation can be an artistic triumph itself. I have tremendous respect for translators; I think their task is much more difficult than anything I do.

BOLO Books:  I know that after the first two chapters (which were used as “samples” to secure the contract), the rest of the novel (Ship of Theseus) was written before the marginalia was added.   How conscious of the location for these notes were you when creating them or did you just include everything you wanted to and hope that the production team would be able squeeze them onto the page once the book was typeset?  Did we lose any intended notes during production because of space issues on certain pages?

Doug Dorst:  I wasn’t paying much attention to the specific locations for the notes the first few times I went through the manuscript. I was just trying to get the arc of the Jen & Eric story to come out right, and trying to find organic moments in which the text of Ship of Theseus might inspire them to write. Once JJ, Lindsey, Josh Kendall (our editor), and I felt that it was more or less in place, I got into fine-tuning. 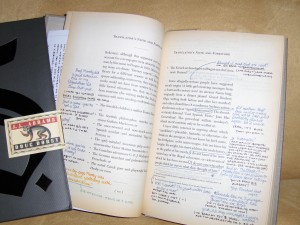 We then handed the manuscript off to the designers, who informed us that there was no way the margin notes would fit—that we had to cut them by 25-30%. This was pretty late in the game, so I flew to New York and spent four days holed up in a hotel with Josh, just cutting and reshaping the Jen and Eric story. I’m glad we did that—the book’s a lot better for it.

After that, there was some more fine-tuning—making changes to pages where there still was too much in the margins. We made some more cuts, but we also decided that some pages’ notes could (and even should) be ridiculously dense or sprawly if that fit with what the characters were thinking or feeling at the moment.

BOLO Books:  You mentioned during the Symphony Space event that Stephen King has been a long-term influence on you and your work.  As a fellow fan, I would love to know what it is about King’s work that you connect with.

Doug Dorst:  It’s pretty simple, really. His work creeps me out in wonderful ways, and he has respect for the inner lives of his characters. For me, The Shining is the greatest example of that. I’m very fond of The Dead Zone, too.

BOLO Books:  One of the most vivid images the reader is left with after reading S. is the collection of sailors who have their mouths sewn shut.  This also played a part in the book trailer created to generate pre-buzz for the book launch.  How did that idea come to you?

Doug Dorst:  I knew S. (the character) was going to get shanghaied, and I wanted the atmosphere on the ship to be threatening, the crew sinister. I thought silence would feel particularly threatening—that not knowing what anyone around him is thinking, especially when he’s powerless in the situation, would rattle him most. It didn’t seem interesting enough to have the crew simply choosing not to speak; I wanted them to have a reason. When I pictured them with their lips sewn, I was immediately creeped out, and that seemed like a good sign, so I went with it.

BOLO Books:  Are there still mysteries to be uncovered concerning the book?  I know that the cipher for Chapter 10 has been broken, but knowing how these things go, I suspect there is more to be revealed.  Any clues you would like to drop here?

This is a standard question I ask all of my interviewees, but it seem particularly appropriate given the nature of S.   If forced to choose only one format for all your future reading, which would you choose: Hardback, trade paperback, mass-market paperback, or e-book?  And why?

Doug Dorst:  For now, I’m a hardcover guy—in part because I like the tactile experience and in part because hardcover sales benefit authors most, and I want to support other people who do what I do.

I don’t own an e-reader, but I probably will at some point, and maybe I’ll end up loving it as a format. For now, though, it’s pages-ink-and-binding for me.

BOLO Books:  Thanks Doug.  Continued best wishes on the success of this book.