The Mystery of Three Quarters – The BOLO Books Review

By this point, most crime fiction readers know that Sophie Hannah was chosen by the Agatha Christie Estate to write new novels featuring the iconic Belgian detective, Hercule Poirot. The Mystery of Three Quarters is the third of these “reboots” to be published and quite possibly the best one yet.

When Sophie Hannah took over this task, she introduced Scotland Yard detective, Edward Catchpool – in The Monogram Murders – as the new narrator of these novels so that readers could more easily adjust to any shifts in authorial style from the Christie originals. For those readers who bought into this – like myself – this proved to be the method that made it all seem authentic to the Poirot chronology. By the time readers got to Closed Casket, Catchpool felt like he had been a part of the canvas forever. 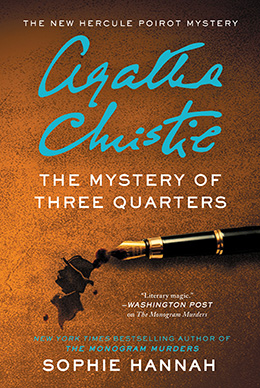 Edward Catchpool once again narrates The Mystery of Three Quarters, but with this new entry, Sophie Hannah takes the leap of bringing Hercule Poirot to the forefront once again; and Mon Ami, let me tell you, she nails it. There is no question Hannah knows and respects Christie’s Poirot and the detective’s personification in this new novel feels like a long-long manuscript written by the Dame herself.

The Mystery of Three Quarters begins with Hercule Poirot being accosted by a strange woman who cannot understand how the famed detective could be so heartless as to send her a letter accusing her of murdering Barnabas Pandy, especially if for no other reason than that she does not even know who Barnabas is. Poirot knows nothing of this letter – supposed signed by himself – but when three other individuals come forth with the exact same letter, and a matching bewilderment, he knows that someone is manipulating this entire group.

As was common in literature of yore, each chapter is given a title that hints at the revelations to come within. As Poirot begins to interview both the folks who received the letters and those closest to them, his suspicion grows and his worry increases – after all, the great Hercule Poirot simply cannot be suspected of accusing innocent people of a crime as devastating as murder. Sophie Hannah also has to get credit for crafting character names that feel completely credible within Agatha Christie’s oeuvre.

With only a vague inkling of what is a play here, Poirot announces the date on which he will announce the identity of the murderer and organizes for certain individuals to congregate at a particular location on that date. Now all he needs to do is figure out what he is going to say. Of course, fans of old-school crime fiction will delight in the idea of the drawing room reveal – such a set piece of those older classics – and here it is deployed magnificently.

Never one to shy away from interesting motives for crime, Sophie Hannah once again wraps this unusual case up with psychological acuity and a thrilling flourish – something Dame Agatha would certainly appreciate. Mon Cher, The Mystery of Three Quarters proves that if Hercule Poirot is going to continue to investigate, Sophie Hannah is the correct author to document his new inquiries.

Buy Links: The Mystery of Three Quarters by Sophie Hannah